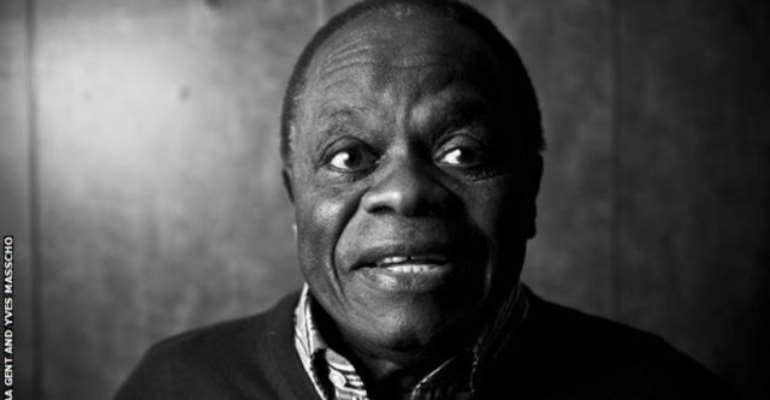 The first player from DR Congo to play in Europe, Leon Mokuna, has died at the age of 90 in the Belgian city of Ghent.

He had settled in Ghent, where he had begun his time in Belgium at KKA Gent and so opened the door for African footballers to play in the country.

He was particularly known for his powerful shot, nicknamed 'Le Trouet' because of the legends that he had burst the back of the net on more than one occasion.

Mokuna grew up in Leopoldville (now Kinshasa) and was discovered when Sporting Lisbon toured Angola in 1954 and made a trip to neighbouring Belgian Congo, as it was known at the time.

There was great expectation in Lisbon as stories of his net-breaking feats travelled with him.

"I'm not a phenomenon but, in fact, I have already broken the nets twice in Leopoldville, because they were old!" he explained when he first arrived in Portugal.

Mokuna scored on his debut for Sporting in January 1955 and finished the season with 19 goals in 11 games.

But the next season he played only twice for club and ended up returning home to play for AS Vita Club.

"Against all expectation and in a very strange way, that was never explained, he was ostracized," said the Sporting fan blog 'Sporting Canal'.

After a year with AS Vita Club he secured a move to Belgium and KAA Gent as he became the first African to play in the league in 1957.

He was twice the top goalscorer at KAA Gent and became a club icon at a time when black footballers were a rarity in Europe.

"Leon Mokuna was a Ghent football icon and will always be treasured by the club," a statement from KAA Gent said.

"KAA Ghent is proud that Leon Mokuna was the first African footballer in Belgium will forever be associated with our club."

Mokuna also featured for KSV Waregem and KV Kortijk and even played twice for Belgium B - the first player of colour to feature in one of their national teams.

But he was never selected for the national team and later blamed racism for not being selected.

At Ghent, he was a consistent goal scorer before moving after four seasons to Waregem in 1961 and then briefly at Kortrijk but a double leg break prematurely ended his playing days.

He went back after independence to coach the Congo-Leopoldville national team at the 1965 Africa Cup of Nations finals in Tunisia.

They lost 5-2 to Ghana and 3-0 to Ivory Coast as they were eliminated,.

He was later a successful businessman before Mobutu Sese Seko confiscated all his properties which led him to settling in Ghent, had nine children.