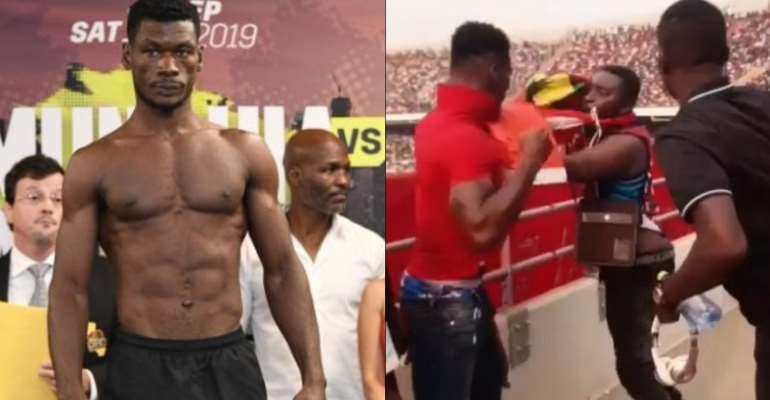 WBO Africa super welterweight champion, Patrick Allotey aka Arrow who assaulted an Asante Kotoko fan, Michael Siaw Agyemang at the Accra Sports Stadium on Sunday has been summoned to appear before the Ghana Boxing Authority Disciplinary and Arbitration Committee on Wednesday, February 5, 2020.

In a letter signed by Patrick Johnson, the Secretary-General of the GBA, Allotey has been summoned to appear at 1pm to show cause why as a licensed professional boxer should not be sanctioned not only for gross misconduct but also for bringing the name of the sport into disrepute.

The boxer was captured in a video footage recording that has gone viral after the top GPL match between Accra Hearts of Oak and Kumasi Asante Kotoko which the away team won 2-1.

Read the full statement below
Dear Sir,
SUMMONS TO APPEAR BEFORE THE GBA DISCIPLINARY COMMITTEE

The attention of the Ghana Boxing Authority to a video footage recording (which has gone viral) captured at the Accra Sports Stadium during the Accra Hearts of Oak Versus Kumasi Asante Kotoko Premier League encounter last Sunday the 26 January, 2020.

In the said recording you soccer fan (whose identity has now been revealed as Mr Michael Siaw) to the point inflicting on him a horrendous eye injury.

You are hereby summoned to appear before the Disciplinary and Arbitration Committee of the 2020 at 1pm to show cause why you a licensed professional boxer should not be sanctioned not only for gross misconduct but also for bringing the name of the sport into disrepute.