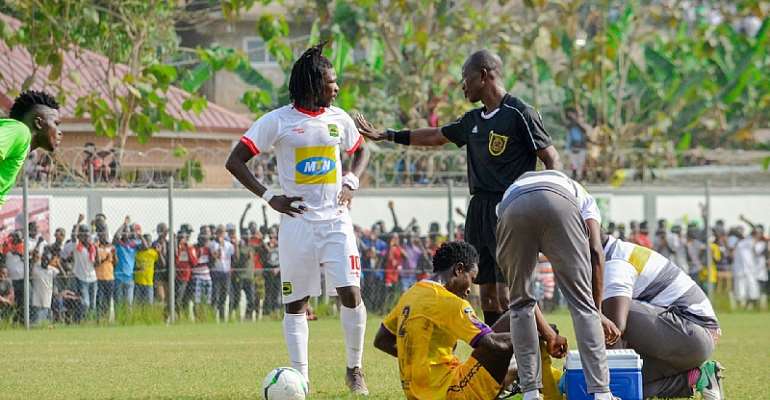 Nicknamed the Porcupine Warriors, the Kumasi-based side went into the titanic clash with the Yellow and Mauves on the back of a narrow loss against Berekum Chelsea last weekend.

Determined to bounce back with a win today, the plans of head coach Maxwell Konadu was torn apart after just 3 minutes into play against Medeama SC at the Tarkwa Akoon Park.

The home side took the lead in the early minutes when in-form striker Prince Opoku Agyemang stepped up to convert a penalty awarded to the side by referee Jones Akubiem.

Now in the driving seat, Medeama SC controlled the pace of the game for most parts of the first half to ensure they went into the break with the one-goal lead.

Asante Kotoko, despite coming in strong in the second half could not restore parity especially after they were forced to play with 10-men after the sending off of defender Imoro Ibrahim on the 60th minute.

Medeama eventually emerged as winners as they picked up another 3 points to remain unbeaten in the 2019/2020 Ghana Premier League season.