Talking Points From The Weekend In Serie A 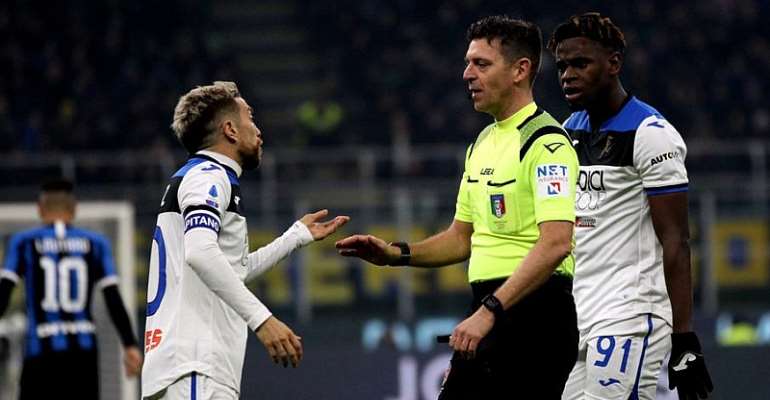 VAR SHOULD HAVE AWARDED ATALANTA PENALTY
The VAR official should have intervened to award Atalanta a first-half penalty in their 1-1 draw at Inter Milan, Serie A's head of refereeing Nicola Rizzoli said on Monday.

Replays suggested that Inter Milan's Lautaro Martinez tripped Atalanta forward Rafael Toloi by wrapping his arm around the Brazilian's ankle, however the referee waved play on and the VAR did not intervene.

"Certainly, in those circumstances, the technology should have been used," Rizzoli told RAI radio. "The VAR official made a mistake, these are situations where VAR should intervene."

Inter were winning 1-0 at the time but Atalanta equalised in the second half and were awarded a penalty late in the game which was saved by Inter goalkeeper Samir Handanovic.

Rizzoli added that VAR official Massimiliano Irrati would not be dropped "in a punitive way." But he added: "He needs to recompose himself and a Serie A referee must always be 100%."

TORINO WIN FAILS TO PLACATE MAZZARRI
Torino's 1-0 win over Bologna failed to placate coach Walter Mazzarri. In a tense post-match interview, he refused to comment on protests by Torino fans and then criticised the angry reaction of forward Simone Verdi to being substituted.

"I don't want to talk about the atmosphere among the fans, I coach the team," said Mazzarri. "The boys played with commitment, I'll leave the rest to the commentators."

Mazzarri added that Verdi could face a fine for his behaviour. "If he keeps losing the ball as he did at the beginning of the second half, I'll replace him. He's a player like any other and you have to have respect when you're substituted."

Coach Antonio Conte has complained repeatedly that his squad lacks strength in depth.