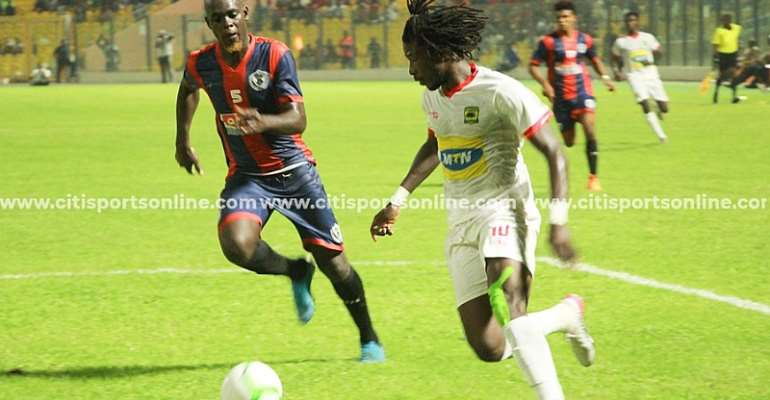 Head coach for Kumasi Asante Kotoko, Maxwell Konadu has shared his delight to the outstanding performance of attacker Sogne Yacouba in the team’s win against Legon Cities FC last Friday.

The Burkinabe import was in action for the Porcupine Warriors on the Matchday and put up a 5-star performance that earned his side all 3 points after cruising to a 3-1 win.

Though Yacouba could not get on the scoresheet, he was the livewire of the Reds and provided two assist that proved key in the crucial away win.

At the end of the encounter, the forward was handed the Man of the Match award for his contribution to his team’s triumph.

Assessing the performance of Sogne Yacouba in the post-match press conference, Kotoko coach Maxwell Konadu indicated that he has upped his game from the team’s previous meetings against Hearts of Oak and Techiman Eleven Wonders.

“Very very impressed today. Look against Hearts of Oak his performance was somewhere. Against Eleven Wonders he upped his game and today it was very good. It was just unfortunate he couldn’t score. But today he was much much better than the two games he played before”, the experienced gaffer said.

Coach Konadu will hope for an even better performance from the player when Kotoko takes on Berekum Chelsea at the Baba Yara Sports Stadium next weekend.