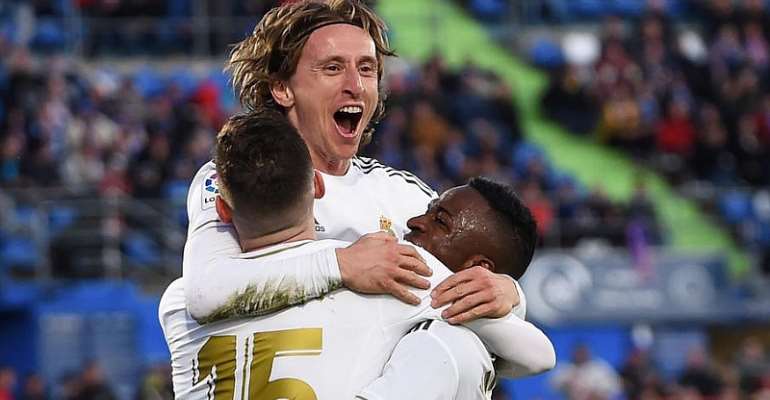 Real Madrid made an impressive start to the year as they picked apart a robust Getafe side to win 3-0 in La Liga on Saturday.

Raphael Varane was the instigator of two goals at the Coliseum Alfonso Perez, first pressuring Getafe's David Soria into a missed punch and an own-goal before himself heading home a cross from Toni Kroos.

"I'm happy with his performance but it's especially important when Sergio Ramos isn't there, to have another leader," said Madrid coach Zinedine Zidane, referring to Ramos' absence through suspension.

Luka Modric added a third deep into injury-time after a brilliant first-time pass by Gareth Bale had set Madrid away on the counter-attack.

Victory sends Zidane's side top of the table briefly at least, one point above Barcelona, who play later on Saturday against Catalan rivals Espanyol.

Atletico Madrid climbed to third, five points behind Real, after they beat Levante 2-1.

Getafe remain seventh and very much in the race for Champions League qualification.

Another excellent season under coach Jose Bordalas is proving last year's remarkable top-four challenge was far from a fluke.

But their usually stubborn defence was overly-generous as Soria's mistake and then a free header put Madrid in charge before Modric completed what was, in the end, a comfortable win.

"We did it and we did it by fighting," Zidane said.

Without either Ramos or Eden Hazard, who continues to nurse an ankle injury, this looked an awkward fixture for Zidane's team on the back of a two-week winter break.

Instead, they keep the pressure on Barcelona before travelling to Saudi Arabia next week, where they could face a Clasico final in the Spanish Super Cup, with Valencia up first on Wednesday in the last four.

HAZARD STAYS HOME
Hazard will stay at home after Zidane confirmed on Friday the Belgian will not return until later this month at the earliest.

His worryingly extended absence has offered a reprieve for Isco, who started again, and Bale, who twice should have scored in the second half, only to tee up Modric via substitute Fede Valverde.

At the other end, Thibaut Courtois appears finally to be finding his best form after a rocky start since his summer move from Chelsea.

"He saves us two or three times in the first half, he was key," said Zidane.

Getafe's success under Bordalas has been built upon tenacity as well as discipline and hard work, with right-back Allan Nyom particularly eager to make his presence felt on Bale early on.

Yet one late challenge too many earned Nyom a yellow card and Madrid a dangerous free-kick that led to the opener shortly after the half-hour mark.

Kroos' cross was put back in by Ferland Mendy on the opposite side and while Soria sprung out to punch, he failed to connect and only succeeded in sending the ball bobbling into his own net.

Karim Benzema tested Soria at his near post but Courtois was the busier of the two keepers. He palmed away a stinging volley from Mauro Arambarri, pushed out a drive from Faycal Fajr and then blocked a close-range header from Leandro Cabrera.

Getafe's frustration was compounded eight minutes into the second half when an unmarked Varane nodded in Kroos' whipped cross and the home side never looked like being revived thereafter.

Bale tried to chip Soria and then go round him but made amends for his misses in injury-time.

Mendy twisted free before feeding Bale, who curled the ball beautifully, first time and on the turn, into the path of the sprinting Valverde.

He could have scored himself but instead set up Modric, who finished into an open net.

Atletico have struggled for goals this season but scored two in five minutes at the Wanda Metropolitano as Angel Correa converted Kieran Trippier's cross in the 13th minute before Felipe Monteiro added a second in the 18th.

In between, Levante also equalised through Roger Marti and they might have snatched a point at the end only for Jan Oblak to produce a brilliant save to deny Enis Bardhi.