Odoom Takes Over Hearts But Tunisian Coach Eyed For Job 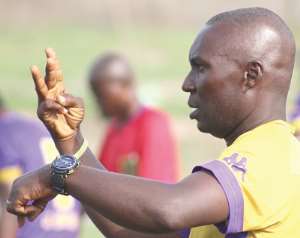 Accra Hearts of Oak have begun hunting for their 20th coach in the last decade after parting ways with head coach and Technical Director, Kim Grant.

The coach was axed on New Year’s eve just days after the team lost their opening Premier League match 1-0 at home to Berekum Chelsea last Sunday.

Grant’s dismissal last Tuesday confirmed long-held rumours that the club’s board of directors had fallen out with the coach who was appointed on November 8, 2018, during the tenure of former Hearts Managing Director, Mr Mark Noonan.

The former Ghana international joined the Phobians after previous stints with Elmina Sharks.

Tunisian linked
Already, Tunisian trainer, Tarek Jani has emerged as a likely replacement for Grant, even though Hearts have since named Edward Nii Odoom as head coach.

While media reports suggest that officials of Hearts have commenced negotiation with the Tunisian, a close source to the club told the Daily Graphic yesterday that no such negotiations had been held with the 40-year-old ex-San Pedro coach because the Hearts management trusted in the ability of their stop-gap coach, Odoom, who will lead the team to play Medeama on Sunday.

“We have not started negotiations with any Tunisian coach but what I know is that a French-Tunisian’s name has popped up. Odoom is also a good coach and we want to give him the chance to guide the boys because he has what it takes to turn the club around,” the source noted.

Meanwhile, football website Ghanasoccernet.com has quoted Jani as confirming talks to take over Hearts and also indicating his readiness to take up the job if offered to him.

"I am communicating with Ghanaian side Hearts of Oak to take over the technical leadership of the team," the Tunisian technical brain said on Wednesday.

"Negotiations are still going on. Of course I will be happy to work with one of the oldest African clubs," the coach was quoted as saying.

Risky job
Grant’s exit is a further indication of the high risk involved in coaching Ghana’s oldest existing club following the dismissal of 18 others in the last decade.