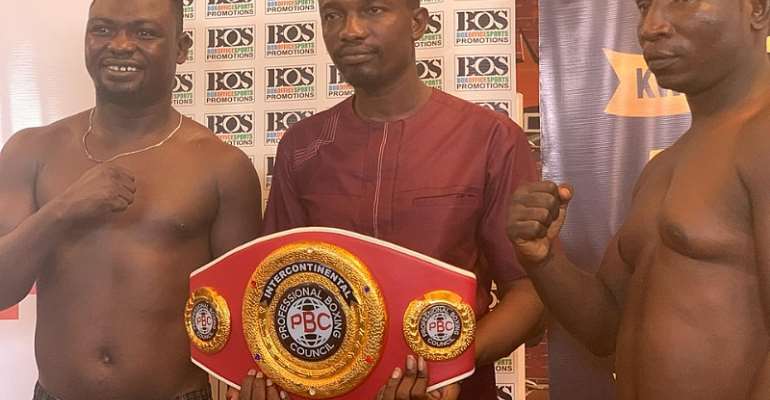 Speaking at the weigh-in and final press conference at The Gym in Accra on Wednesday, Ajuwa said he has prepared very well as he knows the calibre of boxer that the Ghanaian hero is.

Ajuwa who has 20 fights winning 15 (14 of his opponents going down by KO) and losing 5, expressed that he has travelled wide and knows the terrain in Ghana and even Las Vegas in the USA where he was signed by Mayweather Boxing and had the opportunity to know much about the game.

Born in1990 on 24th December, he and his trainer promised to win the fight and take the belt to Lagos, Nigeria.

But the undefeated Bastie Samir replied by commending Ajuwa for his courage to face him in Ghana, as he is very hungry for fights, and will go wilder with a title belt at stake.

According to Bastie, he has the best trainer in the world in Coach Ofori Asare, who is a motivator and inspirer.

Promoter of the fight, Box Office CEO Alex Ntiamoah Boakye assured that all is set, and he expects a night of ‘fisticlash’, as both boxers will give fans a good fight.

The mouth-watering bill has crack boxers like a pride of Kwahu, Emmanuel Danso who meets Jones Quarshie in a light heavyweight bout.

Young rising star, Sampson Segbedzi who trains at The Gym meets Chorkor based Daniel Kotey in a welterweight contest.

Gate fee is free with sponsorship coming from Media Excel and Kwahu Republic.

Coach Asare appealed to the fans to comport themselves while enjoying the fights, and on behalf of all the boxers and trainers at Wisdom Boxing Club (WBC) wished all boxing fans a Merry Christmas and a Happy New Year.