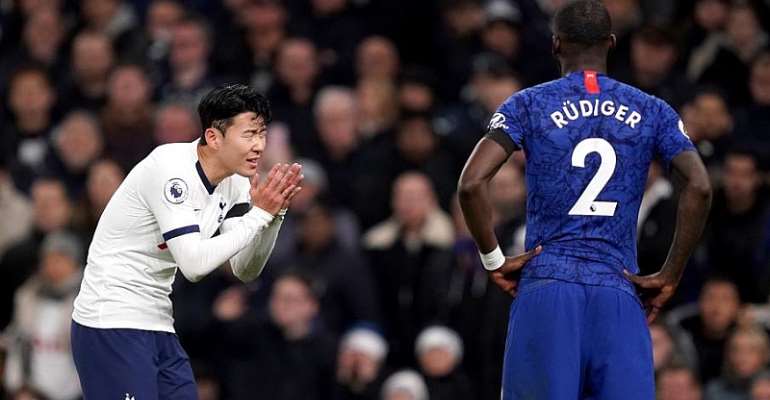 Chelsea manager Frank Lampard spoke up for Antonio Rudiger on Tuesday after the defender was criticised by Tottenham Hotspur boss Jose Mourinho for his part in the sending off of Son Heung-min in Sunday's 2-0 derby win.

Son kicked out in retaliation at Chelsea defender Antonio Rudiger as they challenged for the ball, and referee Anthony Taylor produced a straight red after a VAR review, leaving Spurs with 10 men for the last half hour.

Mourinho had taken a dig at Rudiger, who was also allegedly racially abused after the incident, for going down too easily, telling him to "stand up and play", but Lampard said the red card was the correct decision.

"With Toni and this incident, when he's having to post after the game about something that we know is a huge deal, I think to question his integrity in that time is disappointing," Lampard told reporters ahead of Thursday's game against Southampton.

"What I heard on the commentary and post-match reflection is that the Son incident was a red card... It wasn't a brutal red card but it was an instinctive one that warrants a red card in the modern-day.

"I wouldn't question Toni's integrity on that."

Rudiger had urged Tottenham on Twitter to find and punish the individuals who allegedly directed racist abuse at him during the match, and the club confirmed they were investigating the incident with the help of CCTV footage.

"I saw Toni's social media post, I thought it was well put, from the heart and something he obviously feels very strongly about," Lampard added.