Joshua Had 'Health Issue' Before First Fight With Ruiz 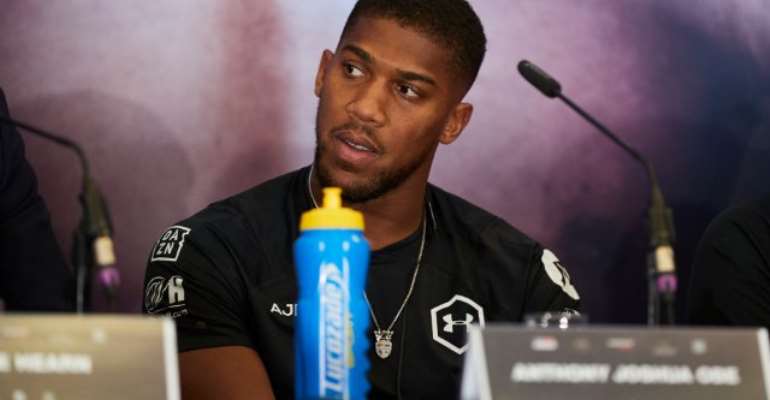 Unified world heavyweight champion Anthony Joshua said a health issue left him "tired" and "drained" in the build-up to his June defeat by Andy Ruiz Jr.

Joshua, 30, reclaimed his world titles in Saudi Arabia on Saturday, dominating the Mexican over 12 rounds.

Conspiracy theories had circulated after his initial defeat, one of the biggest shocks in heavyweight history.

"I had some issue with my health which I was going through for a long time," Joshua told the 5 Live Boxing podcast.

The Briton added: "I didn't know what was wrong with me. I felt so tired and drained and thought it must be down to training.

"In the changing room before the fight I got a bucket of ice and was putting my head in it thinking 'why do I feel so tired?'

"The responsibilities of being world champion are difficult. All that stuff, feeling so tired, dealing with obligations.

"Now I have energy, I haven't missed a session."

He added: "After my check-ups it showed what the problem was and this is what you have to get sorted.

"Even in this camp I had an operation done but as I'd started training in June I had no issues."

Joshua refused to say what the operation was but it is understood the procedure he had was linked to the issue diagnosed after his defeat by Ruiz.

Joshua opens up at last
Joshua had hinted previously that he had something to reveal about what went on before his first career defeat and, after initial hesitation, provided at least some insight to the 5 Live Boxing podcast.

Theories aired in the interim had ranged form him having shown the effects of being concussed in sparring to having a seizure before the bout at Madison Square Garden.

He now says he feels "back" and "focused".
The two-time world heavyweight champion also said he learned a valuable lesson not to accept opponents at short notice - Ruiz was drafted in six weeks before their fight after American Jarrell Miller failed three drug tests.

Joshua, who will return to the UK in the early hours of Monday morning with the IBF, WBA and WBO belts, was on the front of Sunday's Saudi newspapers, alongside Crown Prince Mohammad Bin Salman, who attended his fight.

Despite widespread criticism of staging the bout in a country criticised for its human rights record, Joshua said he would "100%" be happy to return to the kingdom on holiday or to perform.

'All challengers are welcome'
Joshua is now expected to face either the WBO's mandatory challenger - currently Ukraine's Oleksandr Usyk - or the man in the same position with the IBF, Bulgarian Kubrat Pulev.

He said he was no longer interested in calling out WBC champion Deontay Wilder for a historic bout with all four world heavyweight titles on the line.

Chasing a contest with compatriot Tyson Fury was also dismissed as Joshua said he hoped to focus on one "hurdle" at a time.

"Looking so far ahead it can be a blurry vision looking that far out," Joshua told BBC Sport.

"Sooner or later I will be looking directly at the undisputed championship of the world.

"If the opportunity presents itself I will fight Wilder and Fury. Wilder has a fight with Fury in February. Once that is out of the way they can start mentioning my name.

"I can't keep on fighting all the champions, the best in the division and then other people who say they want to step up don't step up.

"All challengers are welcome to take on this current unified champion."

Joshua said to defend his belts "on home soil would be big news" after promoter Eddie Hearn revealed he had been in discussions over a fight at Tottenham's new 60,000-capacity stadium, most likely against Pulev.

"It would be mega," Joshua added. "Looking at how many people came out here shows there is still a big interest in the heavyweight division, especially now we are taking the belts back.

"Sometimes it would be better against a Brit, but if not I follow the mandatories and defend them that way."