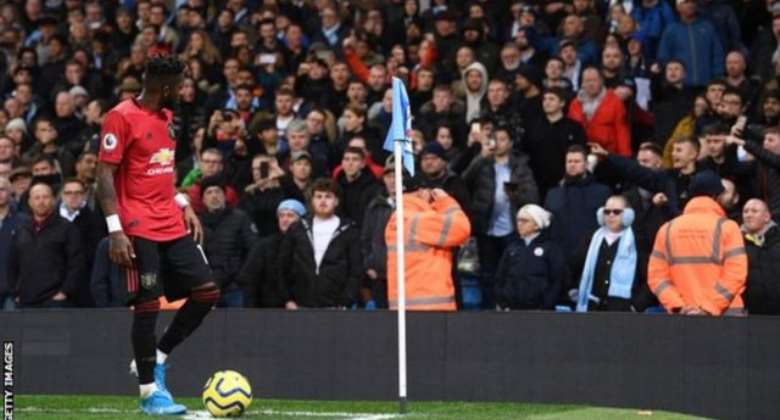 Manchester City have pledged to issue a lifetime ban to "anyone found guilty of racist abuse" after Manchester United players said they were targeted during Saturday's derby at Etihad Stadium.

City said they were "aware of a video circulating on social media" which seems to show a supporter making monkey gestures towards United players.

The incident happened when Fred went to take a corner in the second half.

The Brazilian also appeared to be hit by an object thrown at Etihad Stadium.

United won the game 2-1.
Anti-racism body Kick It Out says it has been "inundated" with reports of alleged racist abuse after the incidents were captured by television cameras.

"We hope swift action is taken to identify the offenders," Kick It Out said.

More than one United player said they had been abused after the game, with the Old Trafford club reporting their comments to referee Anthony Taylor and Manchester City.

City said they are working with Greater Manchester Police to help them identify any individuals who were involved.

"The club operates a zero-tolerance policy regarding discrimination of any kind," City added.

United manager Ole Gunnar Solskjaer said: "I've seen it on the video and the fella must be ashamed of himself. It is unacceptable and I hope he won't be watching any football any more."

"It is a battle to fight every day. Unfortunately it has happened in many places," he said.

United forward Marcus Rashford, who was also playing when England's Euro 2020 qualifier in Bulgaria was overshadowed by racism in October, called for more to be done to tackle the problem.

"The fact it is still happening is not good enough," he said.

"The necessary departments need to do the right things to stop it in the game. It is a big negative in the sport and the country."

With United leading 2-0, a number of objects were thrown by supporters in the home end when Fred went to take a corner in the 67th minute.

The Brazilian moved away from the corner flag before going back to take the set-piece.

City midfielder Fernandinho, along with other home players, urged the fans in that corner to calm down.

Play resumed a few moments later once referee Taylor picked up a number of objects in that area of the pitch.