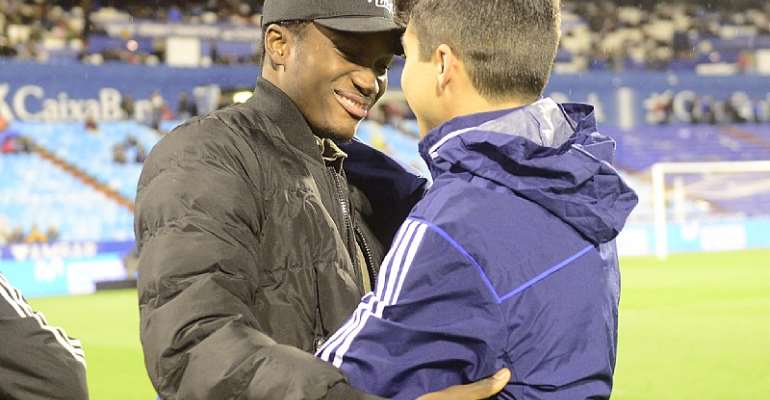 Ghana forward, Raphael Dwamena returned to Real Zaragoza on Saturday when his former side hosted Girona in a 3:3 drawn game.

The 26-year-old who abruptly ended his contract with the La Liga second-tier side was given the opportunity to greet his teammates.

Dwamena joined Zaragoza on loan until the end of the season from Levante during the summer but has been asked to stay away from playing football actively due to heart problem.

His performance with the blanquillo set was being remarkable until unfortunately, his heart problems forced him to stop.

An absence that the team is noticing and that has forced the sports management to reinforce the attack with the arrival of Javi Puado from Espanyol.

Almost three months after having had to abandon football and having received many messages of encouragement for his recovery, Dwamena made a return to the La Romareda to watch his former side against Girona.

The striker has been on the grass of the Aragonese fief saluting his teammates from the Zaragoza team and has been very happy for the reunion showing the best of his smiles.

Dwamena has merged into a hug with his partner in the Luis Suarez attack and talked with the white players before the start of the match.

"Raphael Dwamena is in La Romareda and has greeted his former teammates 👋 What a joy to see you here!"

Undoubtedly, the Ghanaian setback has greatly affected the whole of Víctor Fernández, who has not just met in these last matches.

Although the absence of Dwamena is only one of a long list of injured with which the coach of Zaragoza has had to face the matches.