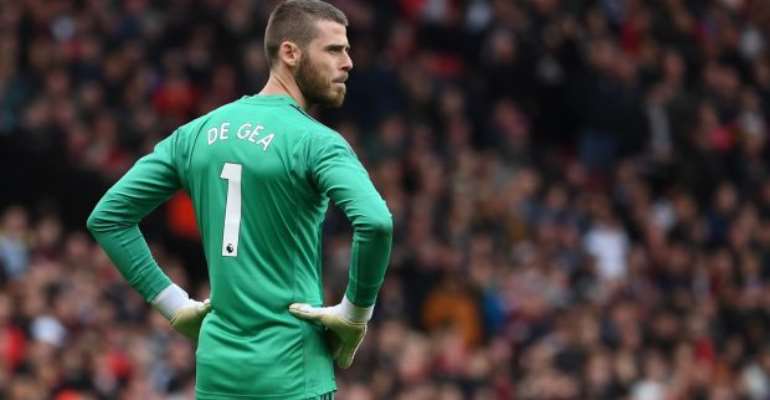 Manchester United goalkeeper David de Gea says the team's performances this season have been "unacceptable" and this is the "most difficult" period he has experienced since joining the club.

The Red Devils lost 1-0 at Newcastle United on Sunday to extend their worst start to a league season for 30 years.

They are 12th in the Premier League, two points above the relegation zone.

Speaking to Sky Sports, he added: "We didn't create any proper chances. We have a lot to improve. I don't know what to say. We need to step up.

"We have injuries but it's not an excuse. We are Manchester United. We need to train hard to keep fighting and to get back to winning games."

'I don't know what is happening'

Midfielder Matty Longstaff, 19, scored the only goal on his Premier League debut to secure the points for Newcastle at St James' Park.

It extends Manchester United's winless away run in the league to eight matches, going back to a 3-1 victory at Crystal Palace on 27 February. It is their worst run on the road since September 1989.

For De Gea, it is the most difficult spell he has endured since joining the Old Trafford club from Atletico Madrid in 2011.

The Spaniard won the Premier League in Sir Alex Ferguson's final season in 2013. Since then, they have finished second once but failed to mount a serious title challenge.

He has also worked with four permanent bosses and two caretakers during that time - including Solskjaer, who was appointed manager in March after a successful spell in temporary charge.

When asked what the team needed to do to improve, De Gea replied: "Everything. A lot of things to improve.

"It's probably the most difficult time since I've been here. I don't know what is happening. We cannot score even one goal in two games. Sorry to the fans. We will keep fighting, for sure. We will come back, but at the moment we're in a difficult situation."

Speaking last month, Manchester United executive vice-chairman Ed Woodward said "it is important we are patient" in order to give Solskjaer the time to turn things around.

When asked how long that will take and whether everyone at the club is still behind him, Norwegian Solskjaer said: "It will take however long it will have to take.

"It's a journey we've started on and the culture is getting there. I can't give you any time but we're getting there. We've given ourselves a big, big uphill challenge to get among the top four - but it's tight and we need to get a run together.

"We've come together and discussed the direction we're going. If you only work on sunny days you'll never get to your destination. We'll have these days but we know where we want to get to."

The former Molde and Cardiff boss said the two-week gap between now and their game against Liverpool has come at a good time because it gives him the chance to "sort the players' heads out".

"Luckily for us it's now the international break. We get time to evaluate what's gone on over these eight games," the 46-year-old former Old Trafford striker told Sky Sports. "It's my responsibility.

"Young boys lacking confidence - they need some help from experienced players and staff.

"They're human and they want to do well. They need to see the results of their hard work and we're not getting those results, so that's going to affect them."

Speaking to BBC Sport, he added: "That [Liverpool] is a perfect game for us. It doesn't help having a meeting tomorrow. They will go away with their national teams, meet their team-mates and come back fresh."