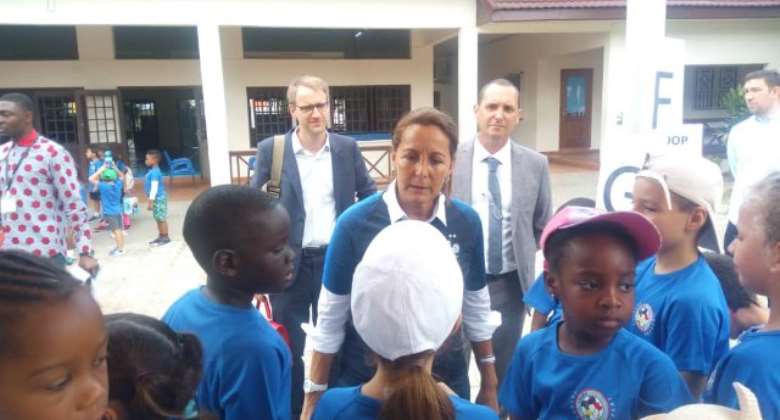 The French Ambassador to Ghana, Madam Anne Sophie Ave on Wednesday, September 25 joined pupils of French-accredited schools in Ghana to mark their Sports Day at the Lycée Français d' in Accra.

The Ambassador addressed the students, observed and took part in activities such as sack race, gymnastics, musical chairs among others.

In her address, Madam Anne Sophie Ave said the event forms part of a publicity campaign dubbed ‘Generation 2024’ which seeks to inculcate in the pupils a love for sports and spirit of competitiveness.

She also reiterated the French government’s commitment to using sports as a means of strengthening their relationship with Ghana.

“The whole event is making children play sports, it’s about them getting acquainted with sports. This is also in line with the kind of cooperation we want with Ghana. It’s in line with our President’s expression in Ouagadougou that we need to corporate in fields that we did not explore so far like sports, youth, environment and education.

With the 2024 Olympics Games set to be staged in the French capital of Paris, the French government has embarked on brand awareness and publicity campaign to generate attention, interest and also highlight the benefits that come with hosting the world’s biggest sporting festival.

The campaign is targeted at the youth who according to the French government are the major benefactors of an Olympic and Paralympic Games.

N/R: Over 300 suspected criminals arrested in military opera...
38 minutes ago