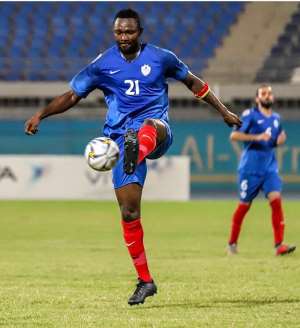 Ghanaian center-back Vincent Atingah was named man of the match after impressing for Al Shabab in their 2-1 win over Al Yarmouk in the opening weekend of the Kuwaiti League.

The two clubs locked horns in the season opener to battle for the first 3 points of the campaign which can prove key to the success of the team.

Handed a start after joining the side this summer, Vincent Atinga put up solid performance at the back to help Al Shabab emerge as 2-1 winners against Al Yarmouk at the Mishref Stadium on Sunday.

Striker Ibrahima Gueye bagged a brace for the victors whiles Wissam Al netted the consolation for the losers.

The former Hearts of Oak defender has already proven that he will be key for the side throughout the season.