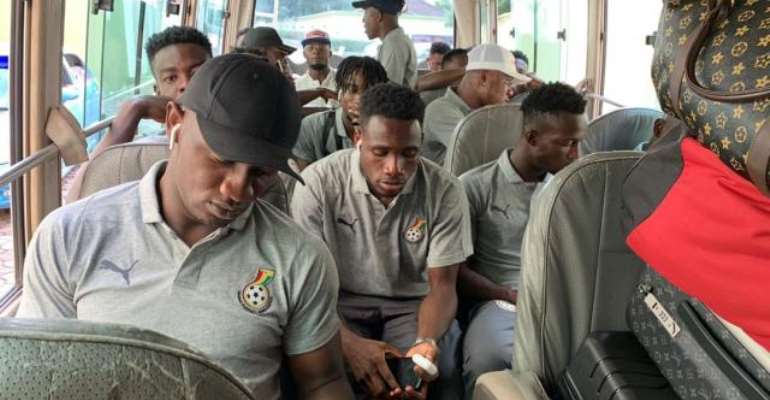 Some members of the Black Meteors team have expressed their frustrations over what they believe is ill-treatment being meted out to them by the Ministry of Youth and Sports and the Normalisation Committee during their AFCON U-23 last round qualifying match against Algeria.

The National U-23 side left the shores of the country for Algiers on Sunday ahead of the return leg of their qualifying series on Tuesday in Setif following a 1-1 result at Accra Sports Stadium on Friday.

The Black Meteors who are aiming to book their Olympic Games berth since 2004, have had their preparations for this game marred by poor travel arrangements which have left some players fuming.

Despite the Ministry of Sports denying that they asked foreign players to buy their own tickets for the game, the Meteors team was spotted with a rickety Coaster Bus with the women’s national team, the Black Queens, and often needed to wait for close to an hour after training for the bus to drop off the Queens first before coming back for them.

In contrast, their counterparts, the Algerians, were bused around in a comfortable VIP bus upon their arrival in Ghana.

“They’re treating the Algerians better than us as if when we go there these guys will treat us any better,” one player told Citi Sports.

“This is disgraceful, it’s like they don’t care about this game. The pitch wasn’t even watered. Just putting water on the pitch too, they didn’t do it,” another cried out.

On Sunday, members of the technical team of the Meteors left their M-Plaza Hotel base to the airport in rented taxis because the bus assigned the entire team was too small to accommodate both players and technical staff and their luggage.

This was after the technical team were forced to drop 4 players from their squad of 22 to 18 because of the ministry’s unwillingness to cater for the flight of the entire contingent.

Despite the challenges, the Meteors will be hoping to qualify ahead of the Algerians for the AFCON U-23 tournament to be staged in Egypt from November 5.

The top 3 in the 8-team tournament will represent Africa at the Tokyo 2020 Olympics.