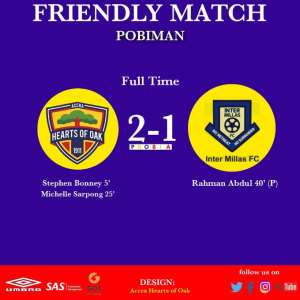 Ghana Premier League giants, Accra Hearts of Oak has posted a 2-1 win over lower division side Inter Millas Football Club (FC) in a friendly encounter at the Pobiman Park today.

The Phobians have been playing friendly matches since resuming training in late July following a five weeks break. They decided to test their strength against Inter Millas FC earlier today and ended up recording a narrow victory.

Stephen Bonney opened the scoring for the victors just 5 minutes into the first half with an assist from right-back Christopher Bonney.

Academy graduate Michelle Sarpong doubled the lead for the Rainbow boys 20 minutes later after reacting quickest in the penalty area when the opposing goalkeeper failed to hold on to a shot from Kofi Kordzi.

A 40th-minute penalty kick converted by Inter Millas FC forward Rahman Abdul halved the deficit for the visitors but it was not enough as they were forced to settle for a defeat at the end of the 90 minutes.

The match forms part of preparatory measures for Hearts of Oak ahead of their crunch meeting with Kumasi Asante Kotoko in this year’s President Cup on Sunday, September 8, 2019.