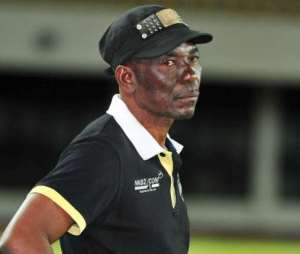 The Ghana Premier League side beat their Nigerian counterparts, Kano Pillars 2-0 on Sunday to seal promotion to the next round of the competition.

The Reds won the two-leg encounter 4-3 on aggregate despite losing 3-2 in Kano a fortnight ago.

Despite such their impressive game at the Baba Yara Stadium, the former Hearts of Oak and Liberty Professionals trainer asserts that the Porcupines will have a tough time progressing ahead of Etoile Sporting Du Sahel though he remains optimistic of Kotoko's qualification.

"It's not going to be easy but looking at the opposition in front but we will be able to overcome them," JE Sarpong said.

He added, "I say we not because I support them but once a Ghanaian always a Ghanaian and I pray they reach wherever they want to reach."

Coach Zachariaseen and his charges have already commenced preparing and training for the 1st leg game which will be played at the Baba Yara Stadium next month.