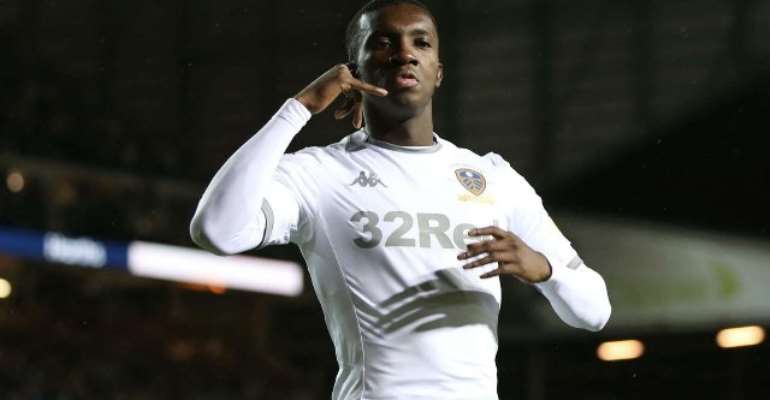 Eddie Nketiah might just be one of the English League Cup’s deadliest forwards going by his scoring record.

This is represented in his four goals from five shots on target, a stat underlining his opportunism and predatory instinct in making his chances count.

The 20-year-old scored a goal as Leeds United bowed out 5-4 on penalties to Stoke City on Tuesday night after the score was 2-2 at full time.

An unlucky Nketiah struck the woodwork in the 26th minute after combining well with Jamie Shackleton.

However, Danny Batth’s 39th-minute header and Sam Vokes’s strike five minutes later ensured that the Potters led 2-0 at half time.

The Arsenal loanee sparked a comeback in the 67th minute before Helder Costa’s strike in the 81st minute forced the game into penalties.

Stoke City triumphed and qualified for the next round after Jack Harrison missed his kick.

In the 2017-18 edition, Nketiah had a debut to remember by scoring a brace as Arsenal survived Norwich

He fired blanks the following season as Arsenal bowed 2-0 to rivals Tottenham Hotspur in the quarter-final.

Nketiah made his third League Cup appearance, as a Leeds player, and his fourth shot on goal translated into a goal as Marcelo Bielsa’s men overpowered Salford City 3-0 at the Peninsula Stadium in the first round of this year's competition.

After scoring on his Championship debut with the winning goal in Leeds United’s 1-0 victory over Brentford last week, the Ghanaian will shift their attention to the game versus Swansea on August 31.