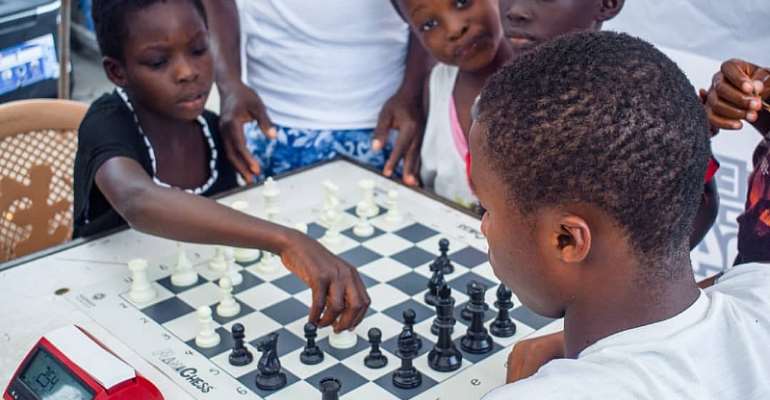 The 2nd edition of the street chess competition organized under the Chale Wote Street art festival by the Street Chess Champ (SCC) team begun on 24th August 2019 at 11 am. It started with random players including the young and old, foreigners and locals having a go at each other. There was excitement, enthusiasm and curiosity as people noted the skill and passion the kids had in playing chess.

A “Last Man Standing” tournament was organized for the kids in U-18 and U-14 categories with about 25 kids participating. The kid with the most wins will be crowned as the “King of the Streets”. It was keenly contested as we had some old faces and new ones taking turns at each other. At the end of the tournament, Daniel (U-18) and James (U-14) came out as Kings of the Streets in their respective categories.

That wasn't the end of the day as the kids continued to battle it out with each other. It's worth noting that these kids came along with friends who were new to the game to be taught this beautiful game of chess they’ve learned. CM Elikem Attah, David Ameku, Leslie Ewool as well as many seasoned players took the newbies through an introductory session as they had come into contact with the game of chess for the first time.

The adults weren't left out of the fun. Apart from their contribution as officials they got the chance to play amongst themselves in a blitz tourney of 5 rounds with a time control of 3+0 mins/player. It was a fierce battle of chess wits as everyone wanted to prove a point. Kennedy Onokpite of Nigeria emerged the winner with a 5 points winning streak. David Ameku and CM Joseph Jamena finished with 4 and 3 points respectively to come through as 2nd and 3rd. The ladies had their own fun as they played among themselves considering the pressure and intense competition of their male counterparts.

The competition was privileged to be given a media coverage by GTV, TV3 and Citi news. CM Joseph Jamena Mensah (Founder of Street Chess Champ) and Mrs Christiana Ashley (vice president of GCA) granted interviews where they shared thoughts, plans and the various initiative of GCA regarding chess and the Ghanaian child. They called on the government, corporate institutions and abled individuals in the society to support them as they use chess as a tool to bring change to every child on the Ghanaian streets.

The first day of the competition came to an end at 6 pm and promised to come back tomorrow.

The 2nd day of the street chess program started at 1 pm with various tourists taking a go at each other on the boards. There were many newbies who were taught the basics of the game. It was a great sight to see as everyone was actively engaged in the proceedings of the day. Many of the foreigners were amazed at how the kids showed so much passion and interest in the game. Many of them capturing these beautiful moments to serve as memories of their time at the Chale Wote festival. The day was graced by the presence of the former GCA president, Group Captain George Arko-Dadzie as well the household favourites, Clemento Suarez of Master and 3 maids and lawyer Nti of Kejetia vrs Makola. These are prominent people in the society whose values the young ones would emulate. They said a word or two and took time to take pictures with some of the kids present as well the guys around.

In all, this edition of the street chess has been a great success with over 100 people engaging in the game. We hope this sends a bigger message to the general public about Chess. “The streets connects us all and it’s on the streets we pick up our secondary socialization which is the principles and values we learn from our surroundings and hold dearly to our hearts. Chess is a game full of principles that teaches the individual how to make good decisions. Therefore if we introduce the game of chess to the streets which teaches valuable principles in life, we will be shaping the lives of many street kids who are our future leaders” said Mr. Mensah. It was a great moment for the kids and we hope they receive the needed skills, support and mentorship required to make them better people in the society. “I also want to use this opportunity to thank my Street Chess colleagues namely: Abraham Junior Dzitse, David Ameku, Elikem Attah, Pearl Addo, Leslie Ewool” said Mr. Mensah.

Long live the dreams of every street kid out there. 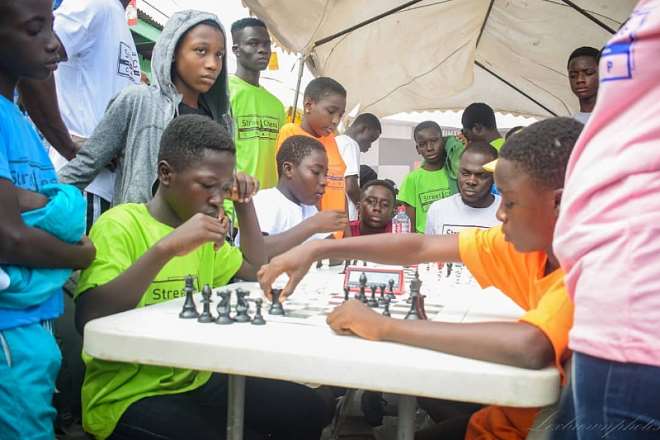 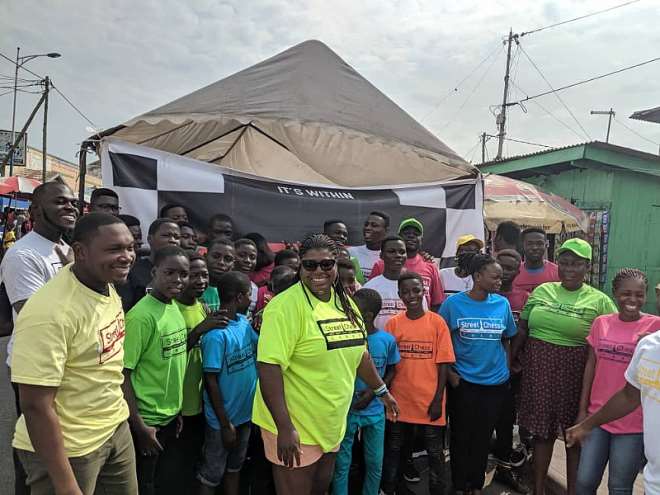 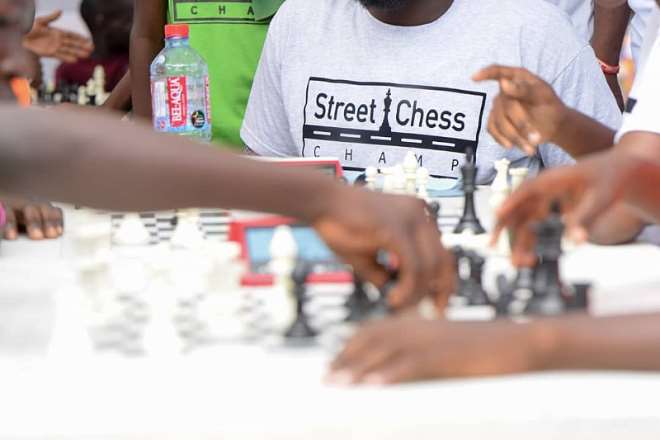 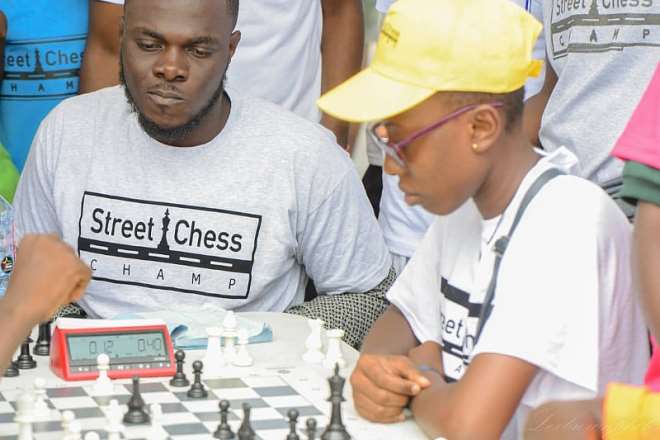 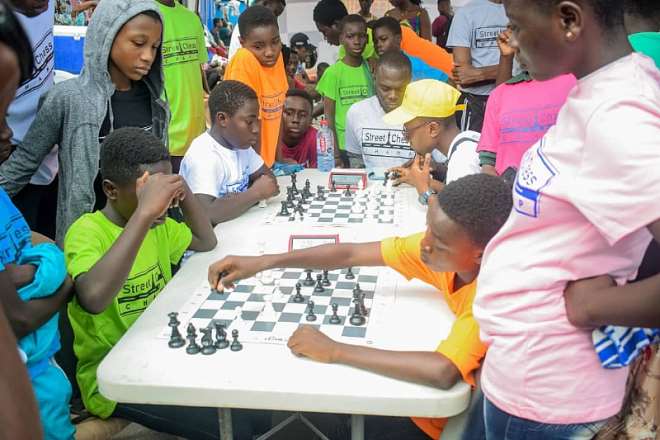 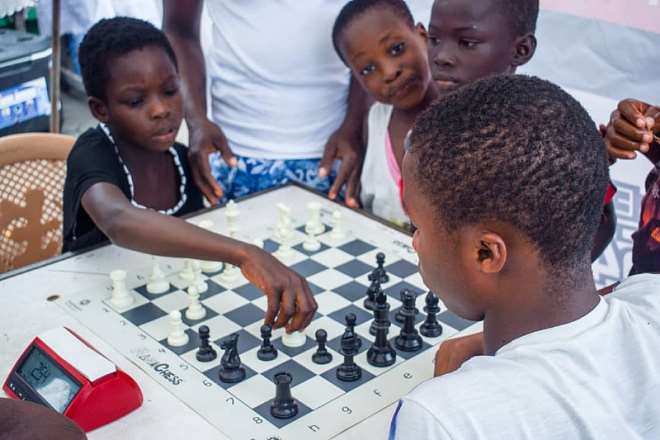