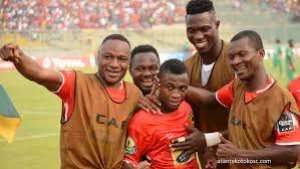 Head coach of Kano Pillars, Ibrahim Musa has admitted that his side lost to a better side in their second leg Confederation of Africa Football (CAF) Champions League.

The Nigerian side lost 2:0 to Asante Kotoko in the return leg staged at the Baba Yara Sports Stadium.

According to him, they have learnt a lesson from the defeat and they would correct their mistakes to come back stronger next season.

Speaking to the media after the defeat, Coach Musa said, "I didn't want to go into the game because we lost. We missed some key players due to injuries. We played 19 matches without a defeat from the league, supper six and we are currently the champions of Nigeria Aiteo Cup.

“So in terms of selection, we had a problem. That is why I didn't want to go into it and I said we lost to the better side," he said.