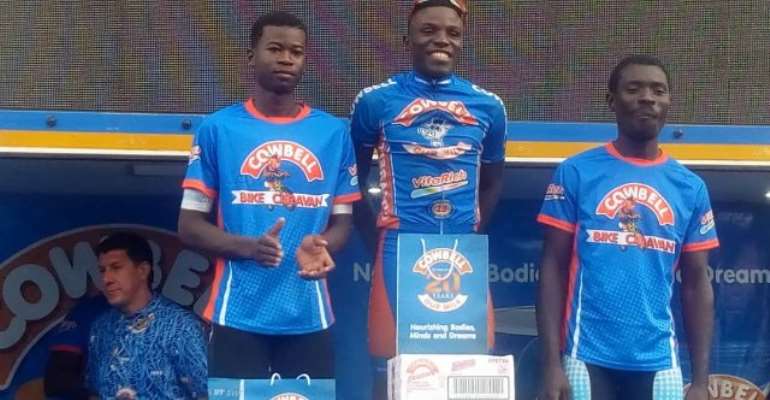 Former champion Frank Akuffo has won the first stage of the Cowbell Cycling Challenge Homowo edition after beating 85 other professional cyclists in Osu on Sunday.

In a keenly contested race, Akuffo, who won the title in 2017, emerged victorious after crossing the finish in a time of 3 hours, 3 minutes and 56 seconds, earning a total point of 25.

The 22-year-old was trailing his competitors after 26 laps of the 81-kilometre race but produced a sparkling performance in the final lap to win the race.

His win saw wild celebrations owing to the fact that he hails from Osu.

”I am really excited to win the race. I want to thank my fans and almighty God. I felt a lot of pressure on me to deliver for my people because everyone was rooting for me,” Akuffo said.

Akuffo walked away with a gold medal, trophy, as well as assorted products from Cowbell worth several thousands of cedis.

Akuffo was followed closely by Abinon Anen who settled for the second position and took home the silver medal and assorted products from cowbell.

The third position was taken by Michael Agbugbalah. He took home a bronze medal and Cowbell products.

Other cyclists who finished in the top 20 also received products from Cowbell.

Next up for the challenge is Pampram on Saturday, August 31, 2019, before the grand finale in Teshie on 7 September.

“I feel very relieved but not completely because this is just the beginning, in fact, the next ones coming up I think is going to be much bigger than what we have seen today,” Brands Manager of Promasidor, Joseph Ashong said.

”I'm really overwhelmed with the turnout, the comportment and everything that went on today and I believe that they have enjoyed this cycling event we brought them as part of their Homowo celebration.”