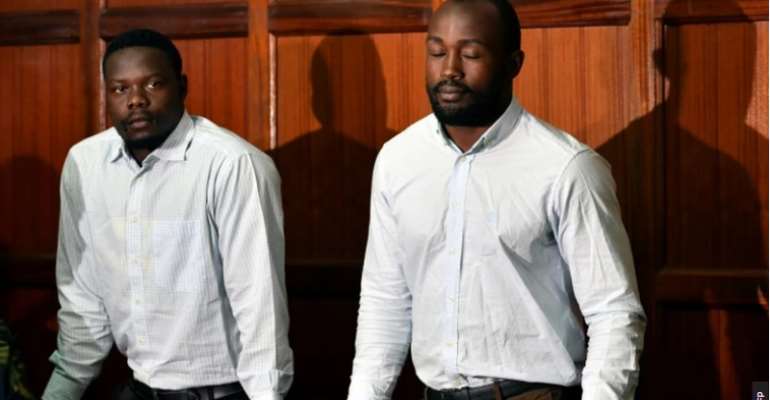 Alex Olaba and Frank Wanyama, seen in the dock, were both handed jail terms of 15 years over the rape of a singer

The international rugby sevens players Frank Wanyama, 24, and Alex Olaba, 23, were earlier this month found guilty of the rape in a case which highlighted what some activists refer to as a tradition of "rape culture" in rugby.

The trial was held in-camera, so details of the evidence provided were not made public.

Mutuku declined a request from the defence lawyers that their clients be allowed to avoid jail time due to their youth and the fact that they had shown remorse.

Wanyama and Olaba, who were both university students when the rape took place, play for the Nairobi Harlequins club and have played for the national sevens team in global tournaments.

Wanyama captained Kenya's second sevens team to win the Victoria Sevens tournament in Zimbabwe in March last year, while Olaba has played as a winger for both the sevens and 15-aside national teams.

Both were suspended from playing when their trial began.

"The rape culture that is ingrained in the sports industry must be dealt with accordingly," she wrote in the petition which gathered just over 10,000 signatures.