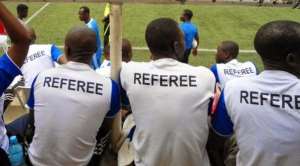 The Confederation of African Football, CAF has announced that top Nigerian referee, Abdoulaye Rhisa Almustapha will be taking charge of the Confederations Cup second leg tie between Obuasi Ashanti Gold and Akonangui FC.

The two clubs are billed for an epic second leg clash after drawing 1-1 at the Sani Abacha Stadium last Saturday.

Defender Richard Agyeman netted a sumptuous overhead kick at the beginning of the second half before it was canceled by Akonangui’s Diosando Mbele ten minutes later.

Ahead of the deciding fixture which will be played in Ghana, CAF has selected FIFA licensed referee Abdoulaye Rhisa Almustapha as the center referee to uphold the laws of the game.

He will be ably assisted by compatriots Sadissou Idi with Salissou Bachir as assistants line one and two respectively. Another Nigerian, Moussa Ahamadou has been appointed to act in the capacity as the fourth official with the match commissioner role handed to Sanusi Mohammed.

The match will be played at the Obuasi Len Clay Sports Stadium on Saturday, August 24, 2019.