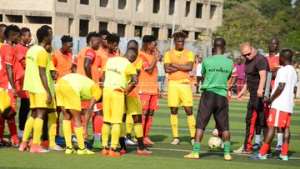 Veteran midfielder Jordan Opoku could not make the list, alongside recent signing from Augustine Okrah and Martin Antwi.

There was, however, no place for Agyemang Badu and goalkeeper Kwame Baah.

Osei Kwame and Felix Annan earned places as the two goalkeepers in the travelling squad with Empem Dacosta, M. Habib and Evans Owusu all making the squad.

Zachariassen has declared that Kotoko is ready for Kano Pillars.

“It’s been a hard period of training for three weeks with 25 intensity sessions so I would say we are in very good shape for the game. The team is ready and we only intend to add a few more touch-ups before the game over the weekend.

“Football is based on scoring. We will always attack and we are going to attack over there also. We are going to play our game and we are looking forward to a very physical encounter which is typical of a Nigerian side but they also like to play the ball. They also love to keep the ball which is very good for us. I hope the guys are up to what they know we can do and we are going to come back with a good result”, he told Class Sports after their training session at the Accra Academy Astro Turf Arena.

The Porcupine Warriors will play Nigerian Side Kano Pillars in the first eliminatory stage of the CAF Champions League over the weekend in the Nigerian city of Kano.