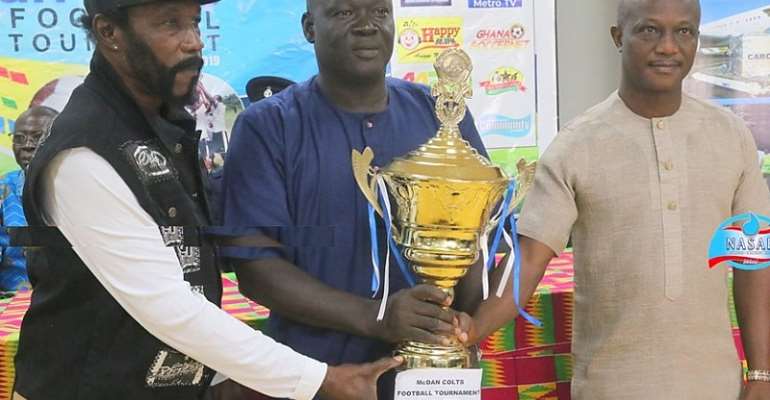 The McDan Colts Football Tournament has been launched at the Media Centre of the Accra Sports Stadium on Tuesday with over 200 clubs expected to participate.

The Greater Accra Juvenile football clubs in partnership with McDan Foundation launched the McDan Colts Tournament with the aim of reviving the growth of grassroots football and improving on the development of youth football in Ghana.

The tournament, scheduled to take place in all the 10 Juvenile districts of Accra, will see colts clubs also from Tema also competing.

The semi-finals and grand finals has been scheduled for the new McDan Sports Complex at La.

Eugene Jacquaye, coordinator of the tournament and chairman of the planning committee said, “Grassroots or Juvenile Football, popularly known as Colts Football in Ghana must be attended to if the nation wants to win laurels at the international stage”

He stressed that colts clubs over the years have contributed to the successes of the National teams, and will continue to do so especially in the improvement of club football.

“All over the world, there are more community youth teams that play in organized leagues which is the main source from where the academies ad smaller clubs feed, it’s no different in Ghana where 2nd and 3rd division clubs feed on our colt football,” he told the gathering.

The competition will be played by all the categories of the colts system with U13, U15, and U17 in 10 Districts.

The Organizers have seeded 24 popular teams to join the qualified 120 teams to make the group stage draw, amongst the seeded clubs, includes Great Falcos, Mighty Victory, King Doko, Great Ambassadors, Kylisto, Adenta Youth, Thy Word, Me and You, Soccer Missionaries and others.

The 144 teams will be put into 12 groups of 4 teams each to battle for the group stage supremacy.

The first 2 teams in each group will advance to the 2 group stage, where they will be put in an 8 group of 3 in an all play all format.

The winners of the 2nd group stage qualify to the quarter-final stage in a knockout format.

All winners in each category will go home with a trophy, set of jerseys, Footballs, and cash prizes.

The GFA technical director, Oti Akenteng said the tournament is significant and commended the organisers.

Black Stars coach, Kwesi Appiah expressed that Ghana football would be better if the colts is revived, and hoped the tournament will get to the other regions of Ghana.

Fiifi Banson of Platinum TV noted that colts is the bedrock of Ghana football, and wished some of the organisers of colts football are honoured.

Nana Amponsah said it is time colts football is played on better pitches as the game of football develops.

George Alhassan who was named Ambassador of the McDan Colts Football Tournament joined Kwesi Appiah and DSP Nuamah, also a former footballer to launch the tournament.

Guests and the media were treated to kpanlogo songs by the McDan Sports Supporters Group from La.

JHS Not Increased To Four Years Or Reduced SHS Duration – Na...
21 minutes ago

We've Been Begging To Survive Over Closure Of Our Shops – N...
21 minutes ago