We Were Unlucky Against Algeria - Odion Ighalo 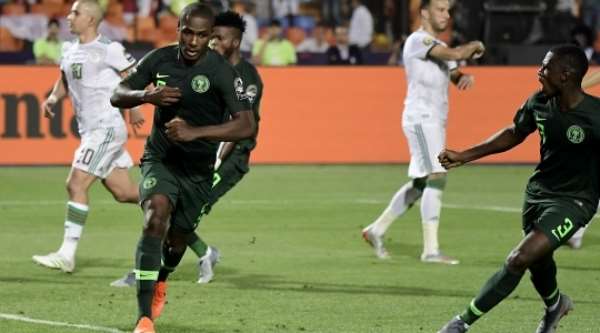 Nigerian International, Odion Ighalo has noted that the Super Eagles were unlucky to have lost 2-1 against the Desert Foxes of Algeria on Sunday evening when the two met in the second semi-finals match of the 2019 Africa Cup of Nations (AFCON) tournament at the Cairo International Stadium.

The North Africa country continued their unbeaten run at this year’s continental showpiece with an incredible performance that saw them denying the 2015 champions the opportunity of progressing into the finals.

Shanghai Shenhua forward Odion Ighalo bagged his fourth goal of the tournament in the second half to restore parity for the West African side after they had gone behind courtesy a first-half own goal from William Troost-Ekong.

In a dramatic climax to the encounter, Manchester City winger Riyad Mahrez scored a sensational free kick in the dying minutes of the match to send Algeria into the finals of this year’s tournament.

Speaking in a post-match interview, Odion Ighalo shared that his side was unlucky on the day and that played a part in their defeat because they deserved more from the match. Nonetheless, the former Watford man admitted they played against a worthy opponent that gave them a tough match.

“It was a difficult game and we were unlucky at the last minute because in the second half we really played well and we deserved more than what we got today. But this is football. They got a free kick in the last minute and they scored and the game finished”, the strong attacker said.

Meanwhile, the striker is now the leading scorer of the tournament and looks on course to pick up the golden boot award.