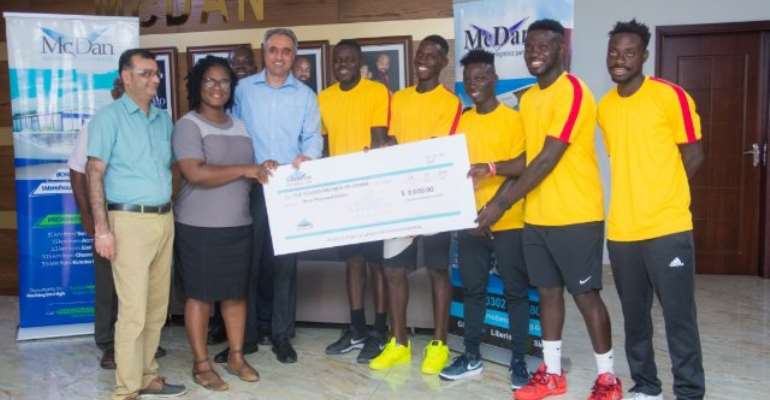 The McDan Group of Companies has presented the victorious Golden Rackets with a $3,000 reward for qualifying for the Europe/Africa Davis Cup Africa Zone III.

The Golden Rackets were presented with the sum on Thursday when the five-member contingent of the national tennis team led by the President of the Ghana Tennis Federation paid a courtesy call on Mr Daniel Daniel McKorley, the Chairman of the McDan Group of Companies and a keen tennis enthusiast.

During an interaction with the players, the Director of Projects of the McDan Group, Leonora Appiah said Mr McKorley was excited by the exploits of the young team and hopeful that the reward would motivate them to return Ghana to the top level of the Davis Cup competition.

"The McDan Group is super excited about the victory and Mr McKorley is filled with so much joy. He wants to motivate the whole team to work and we want to see them in Zone One facing the best players across the world," Madam Appiah said.

The Golden Rackets finished top of Group A in the round robin stage after defeating Cameroun 2-1 and went on to defeat Group B winners Rwanda 2-0 to win the entire contest in the final on the hardcourts at the Kintele Sports Complex in Brazzaville, the Republic of Congo on June 29.

USA-based Herman Abban, who captained the team in Congo, expressed gratitude to the McDan Group and its Chairman for their continuous efforts to develop tennis in Ghana.

The tennis star now based in Chicago said, although their preparations were not ideal because of a lack of funding, they were determined to return Ghana to Davis Cup Zone III.

Isaac Aboagye Duah, president of the Ghana Tennis Federation said the team's next target was to qualify for the 2020 Olympics by winning gold medals at the 2019 All Africa Games slated for between August 16-30 in Morocco.

Resignation Not Part Of Our Covid-19 Laws, Prosecute Carlos...
11 minutes ago