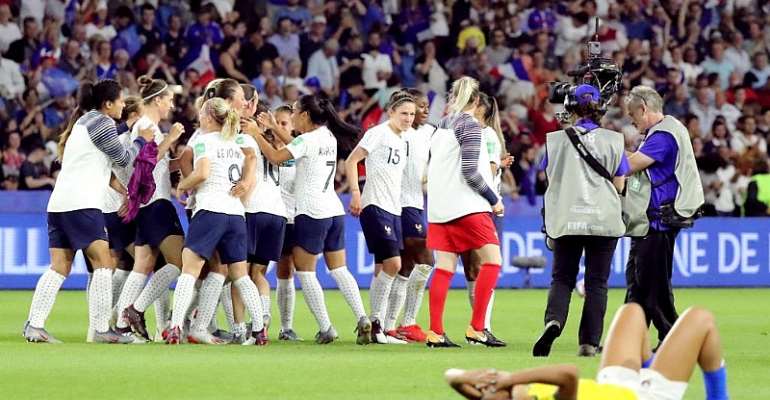 Women's World Cup hosts France survived a scare to beat Brazil in extra time and reach the quarter-finals with a 2-1 victory on Sunday. 'Les Bleues' will face either reigning champions the United States or Spain in the last eight in Paris on Friday.

"It was tense, really, really tense, against a great side. We put everything into it and never gave up," said the France coach, Corinne Diacre, referring to a match which definitely had its fair share of drama.

Despite being roared on by a partisan crowd at the Stade Oceane in Le Havre, France were struggling to put Brazil under any pressure early in the game.

They were denied a first-half opener when Valerie Gauvin's headed effort was disallowed following a VAR review for a foul on Brazil goalkeeper Barbara, but Gauvin converted Kadidiatou Diani's assist to give the hosts the lead seven minutes into the second half.

However, Brazil hit back and a Cristiane header was turned onto the bar before Thaisa made it 1-1 just past the hour mark, her strike eventually being given having originally been disallowed for an offside against Debinha.

A little bit of luck...and teamwork
Into extra time they went, and Captain Amandine Henry scored a dramatic winner when she turned in Amel Majri's free-kick in the 107th-minute.

"After, I didn't know what happened. I didn't even have the strength to get up... I hoped VAR wasn't going to take it back.

"It wasn't easy, we came across a very strong team that played with rhythm, aggression, we were looking to the mind."

Meanwhile, Brazil star Marta issued an emotional appeal to her heirs on Sunday, telling them they are responsible for the survival of the women's game in her football-obsessed country.

The 33-year-old Marta, nicknamed 'Pele in a skirt' by the Brazil great, is widely considered to be the best female player of all time.

"We're asking for support, you have to cry at the beginning and smile at the end," said Marta, the record World Cup scorer with 17 goals.

"Women's football depends on you to survive. Think about it, savour it."

England vs Cameroon
The French could yet end up facing England in the last four, with Phil Neville's team easing through to the quarter-finals thanks to a 3-0 win over Cameroon in Valenciennes.

They will now play Norway.
In other matches, the USA meet Spain in Reims on Monday before Sweden take on Canada at the Parc des Princes in Paris on Monday evening.