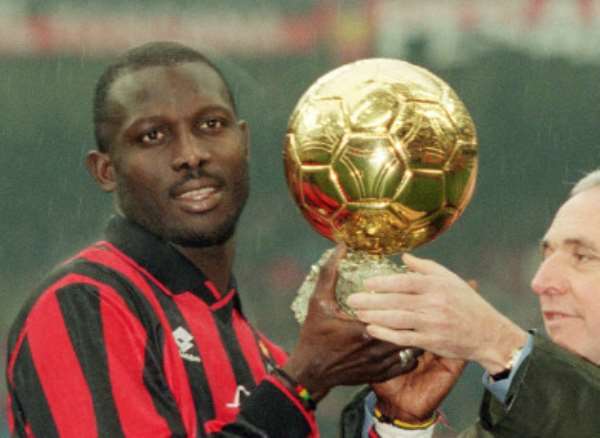 Weah who doubles as the only African to win the Balon d'Or was ranked ahead of Samuel Eto’o and Roger Milla who appeared in second and third place subsequently.

1.George Weah – Liberia
Currently, the President of Liberia, Weah was named the best player in the World in 1995 and appeared in 2nd place the following year. He is also a 3-time African footballer of the Year

Known for his time at Barcelona and Inter Milan, Samuel Eto’o is a 4-time African Footballer of the Year. He was named the 3rd best player in the world in 2005 and also the all-time Top Scorer in the Africa Cup of Nations

4. Didier Drogba – Ivory Coast
A 2-time African footballer of the year, Drogba was also named the 4th best player in the World in 2007. As a powerful striker, Drogba is not only known for his influence on the pitch but off the pitch. He played a major role in stopping a civil in his country when they qualified for their first World Cup.

6. Rabah_Madjer – Algeria
Algerian legend Rabah_Madjer falls next in line in 6th. He has been installed as an African Legend by CAF and IFFHS. He was also installed as a legend of football by Golden Foot. Madjer played a major role in leading Algeria to Africa Cup glory in 1990, winning the best player in the tournament.

8. Salif Keita – Mali
The 1970 African footballer of the Year is arguably the best Malian footballer of all time. He was also decorated with a FIFA Order of Merit in 1996. Keita was part of the Malian side who made it to the final of 1972 Africa Cup of Nations.

10. Laurent Pokou – Ivory Coast
Pokou, an animated figure in Ivorian football played for the Ivorian National team between 1967 and 1980. Pokou holds the record of most goals in a single AFCON game scoring 5 goals against Ethiopia in 1970. He was the top scorer of the African Nations till Samuel Eto’o eclipsed it in 2008. Pokou died on the 16th of November 2016.