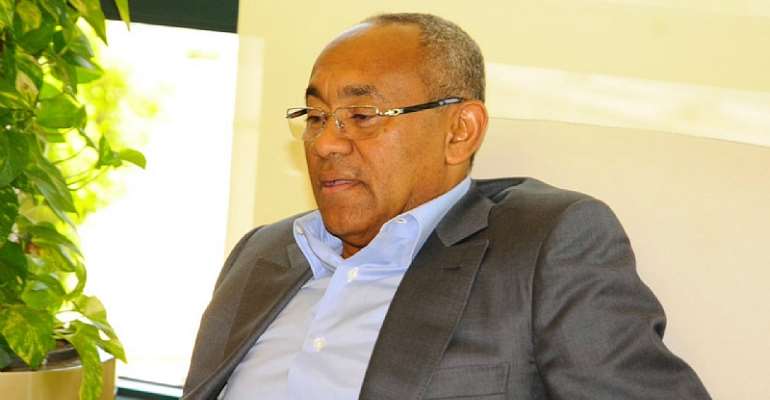 The corruption that has riddled the Confederation of African Football (CAF) and its federations, has now struck at the very top of the organisation with president Ahmad Ahmad being accused of contract fraud, mismanagement of CAF funds, and the payment of $20,000 sums directly into the private bank accounts of federation presidents.

Insideworldfootball has seen documents detailing a sports equipment offer in December 2017 for the African Nations Championship (CHAN) from Puma for €312,000 that was dropped in favour of a $1,195,603 deal for exactly the same equipment to be bought via French company Tactical Steel.

Further documents show a wire transfer of $20,000 from CAF in Egypt to the personal account Mario Mendes dos Reis Semedo, president of the Cape Verde FA, apparently one of many transfers to CAF bosses; as well as a list of Muslim African FA presidents who were invited to make the Umra (a pilgrimage to Mecca in Saudi Arabia) during Ramadan in 2018 with all the expenses paid by CAF at a cost of $100,288.

The emails, letters and documentation seen by Insideworldfootball show a trail of governance and integrity breaches by Ahmad who was elected to the CAF presidency on a tide of African optimism in 2017, overthrowing 29-year incumbent Issa Hayatou after a bitterly contested election.

Ahmad, rather than elevating the continent to new standards of administrative governance, financial transparency and improved standards of play in global competitions, has driven the African confederation deeper into the dark areas of individual corruption and federation underperformance that so many of its football people have been desperate to put behind them.

His power and seemingly untouchable status has been bolstered by the unwavering and public support of FIFA president Gianni Infantino, who he has reciprocated by backing unquestioningly. He is a product of Infantino’s new FIFA.

Having been elected to the top position in CAF in 2017, by December Ahmad was well into his stride, personally intervening in the kit deal for the supply of official equipment for the upcoming CHAN to be played in Morocco in January and February 2018.

Despite the length of time to the championship being short, on December 12 CAF’s marketing department sent an email tender to potential suppliers outlining equipment and kit needed. Puma responded almost immediately and on December 14 a deal was struck for €312,000, a 60% discount on Puma’s list price.

What looked like a face-saving and cost-effective deal was cancelled on December 18 when Ahmad stepped in ordering the secretariat to terminate the deal with Puma and issue the same equipment request to Tactical Steel – a supplier of predominantly fitness goods online to the consumer marketplace.

Tactical Steel is run by Romuald Seilier, a close friend of Loïc Gerand, the personal attaché of Ahmad.

The deal with Tactical Steel has not ended there. To date, it is estimated the French company has invoiced CAF almost $3 million with a number of payments requested by Seilier to be routed through a Turkish company called Serin Hidrafat Ltd and its account with ING bank.

Presidents get a personal reward
In May 2017 CAF’s executive committee decided to give a financial grant to each of its federations of $100,000 which it said could be split $80,000 for the youth football and travel of national first teams and $20,000 allocated to national federation presidents for expenses.

CAF’s general secretary then began the process of transferring the full amount to the member FA’s only to be reprimanded by Ahmad who told him that $20,000 was to be sent to the personal accounts of the federation presidents and not included in the federation payments, that he needed to collect their details.

Not all member association presidents provided their bank details with a number, including the Seychelles FA president, voicing his opinion that receiving the money would be considered as a corrupt payment. It is not clear how many federation presidents received Ahmad’s expenses cash personally but Insideworldfootball.com has seen the documentation of the $20,000 transfer to the Cape Verde president at the same time a $80,000 transfer went to the federation.

Religious reward
Incentivising member association presidents to tow the line is an art form in FIFA circles – usually done via the promise of bigger development grants by its president. It is a skill that Ahmad has been quick to learn and benefit from in his CAF presidency, though in truth he was already practised in the art of receiving.

The $100,288 Ahmad sanctioned on spending in 2018 to take 15 of Africa’s Muslim FA presidents from Cairo, following a CAF meeting, to the Umra during Ramadan (Insideworldfootball has a copy of the travel manifest) is a direct violation of the confederations financial regulations and article 136 of its disciplinary code (see illustration). Although CAF’s compliance officer said the expenses would be covered personally, they were in fact covered by CAF. The CAF disciplinary articles state that: “Anyone who offers promises or grants an unjustified advantage to a body of CAF, a match official, a player or an official on behalf of himself or a third party in an attempt to incite it or him to violate CAF Regulations will be sanctioned.” Those sanctions range from a $25,000 fine to a life ban.

Moral compass
The warning lights have been on for some time regarding Ahmad’s integrity. Having been surrounded by individuals like former first vice-president Kwesi Nyankatwi from Ghana who was caught in a corruption sting accepting bribes, and president of the Central African Republic Federation Edouard Ngaissona who was arrested in France and in currently awaiting trial in The Hague for war crimes, the requirement for a moral compass seems a little trivial, perhaps dangerous even. But if you are defined by the company you keep then Ahmad is in pretty deep water.

Even so, he has developed a habit of staying dry when those around him have been drowning. African colleagues like Gambia’s Seedy Kinteh and Zambia’s Kalusha Bwalya have been banned by FIFA for accepting cash gifts from disgraced former AFC president Mohamad Bin Hamman. A clear email trail showed Ahmad similarly soliciting and receiving money from Bin Hammam. FIFA’s ethics process refused to sanction him and he subsequently rose unfettered and FIFA-supported to one of the governing bodies senior positions.

To bastardise an old joke, when FIFA’s integrity check asked if the candidate has a criminal record, the reply came back: “I didn’t realise you still needed one to get in here.” In Ahmad’s case it seems they knew they didn’t have to ask the question.

The question of FIFA now is whether Infantino will continue to protect Ahmad and keep his key African controller in place. Or will he have to bow to a growing surge of pressure within Africa and allow his ethics body to investigate fully and independently – something that has been a challenge for this FIFA.