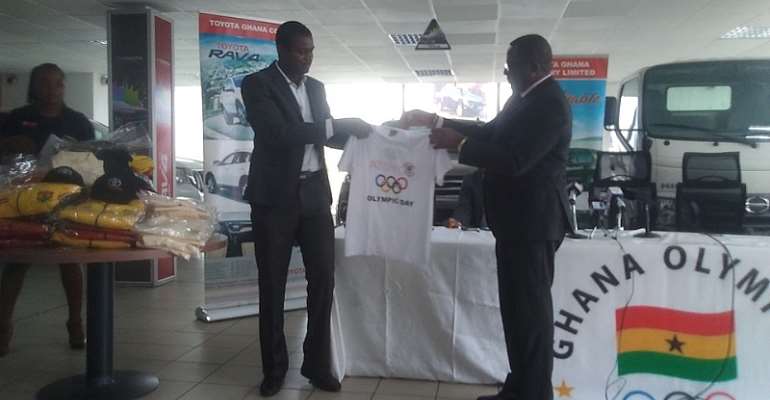 The Ghana Olympic Committee (GOC) has announced that this year’s Olympic Day Run would be held in the Eastern region town of Koforidua on Saturday, June 22, 2019.

He expressed that there would be a Health Walk to be climaxed by a Tree Planting exercise and aerobics.

He said all participants who are able to start and finish the Walk are going to get certificates from the International Olympic Committee (IOC).

The GOC president who also leads the Ghana Weightlifting Federation (GWF) said it would be fun and fitness at Koforidua and thanked Toyota Ghana for the support.

Mr. Isaac Aboagye Duah, chairman of the planning committee for the Olympic Day Run activities said the support from Toyota Ghana came at the right time and hoped many sports fans would come out to participate in the Olympic Day Run.

Andrew Lamptey, National Sales & Marketing Manager of Toyota Ghana said it is part of their social responsibilities and international commitment to promote sports and support people.

"Ghana had patronized our vehicles, spare parts and services and “we want to take this as an opportunity to give back to society through sports. This was why Toyota came on board. We are convinced about the Olympic spirit and this is the time to come on board" he stressed.

Ghana is going with a 10 man team to participate in Freestyle Football, Beach Volleyball, 3 X 3 Basketball and Karate Do Kata.

Team leader and Chef du Mission, Lawyer Stephen Asante Bekoe said they hope to go to the Games not only to make the numbers but to win medals. He was said that due to financial constraints some disciplines like Beach Soccer and Canoeing could not make it.