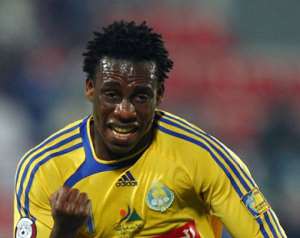 Lawrence Awuley Quaye is a Ghana-born naturalised Qatari footballer who plays for Qatari side Umm Salal and Qatar national team.

He was known as Anas Mubarak after earning the Qatari passport and just known as Lawrence on his shirt.

In January 2003 he was signed by French Ligue 2 side Saint-Étienne. He played his first Ligue 2 match and first league start on 8 March 2003, a 1–1 draw with Wasquehal. He scored his only goal for the club on 6 December 2003, scored the only goal of the match against Gueugnon.

He then left for Qatari club Al-Gharafa. He played 5 times in 2006 AFC Champions League and scored more goals as a defender.

He also a regular starter in 2008 and 2009 edition, played 4 and 5 games respectively. In 2010 edition, he only played in both legs of the quarter-finals, losing to Al-Hilal 4–5 in aggregate.

He played for the Black Starlets at 2001 Meridian Cup.

In 2010, he changed to play for Qatar at 2011 AFC Asian Cup, which Qatar as host. He capped for his adoptive nation in warm-up friendlies, against Haiti, Egypt, Estonia, Iran and North Korea. also played all 3 matches against Kuwait, Yemen and Saudi Arabia in 2010 Gulf Cup of Nations.

He was the starting central midfielder in all 3 group stage matches and in the quarter-finals, all partnered with Wesam Rizik.

After the cup, he played against Russia to prepare for the 2014 FIFA World Cup qualification (AFC).

He also capped for Qatar in an unofficial friendly against FC Lausanne-Sport and FC Bayern Munich.