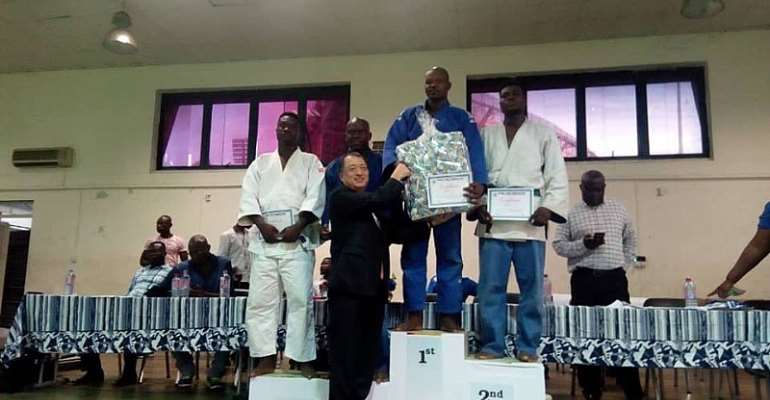 Emmanuel Tetteh President of the Ghana Judo Association believes Ghana can make an impact at the next Olympic Games in Tokyo 2020.

Speaking to media after the 20th edition of the Japan Ambassador’s Judo Open Championship last Saturday at the Accra Sports Stadium, he said the Ghanaian players have improved a lot and most of them are ready for honours.

He named Raymond Normeshie in the over 100kg division who won and regarded as a medal hope due to his experience.

According to Tetteh, most of the judokas are training on their own very seriously and some have been taking part in international tournaments to gain exposure and experience.

He named Razak Alhassan and others who were in Morocco and excelled, also some coaches and officials would undergo courses to sharpen their skills.

He said the Japan Embassy has been of tremendous support and they have to go to Tokyo and prove that they are capable of winning.

The Japanese Ambassador to Ghana, H.E. Tsutomu Himeno who watched the Open Championship at the D. G. Hathiramani Hall expressed his satisfaction with the output of the top Ghana judokas and urged them to train harder and also engage in more competition to make them exposed and battle ready.

Saka Acquaye, deputy director general in charge of technical at the National Sports Authority (NSA) commended the participants and officials.

He advised the winner not to rest but keep on training, and urged the finalist losers not to lose hope, but try to win the next time.