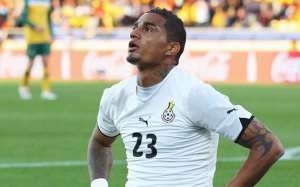 Former AshantiGold SC gaffer, Bashir Hayford has taken a swipe at Kevin-Prince Boateng questioning why he should be recalled back to the national team.

The 31-year-old US Sassuolo has been out of the Black Stars after he was thrown out of Ghana camp during the 2014 FIFA World Cup in Brazil.

Boateng was reported to have insulted coach Kwesi Appiah during the tournament.

However, after Ghana's 1:0 lose to Kenya in the Africa Cup of Nations qualifiers in Nairobi over the weekend, former Ghana U-17 star, Solar Ayew has called on the head coach of the team, Kwesi Appiah to be courageous enough and recalled the former AC Milan star back to the Black Stars.

But the Black Queens trainer says recalling the former Las Palmas star back to the team is needless.

"Why should Kevin-Prince Boateng be given a call-up to the Black Stars?" he quizzed.

"I don't understand why that guy should be given a call-up to the national team.

He further called on Ghanaians to stop mounting pressure on Kwesi Appiah after Ghana's defeat to Kenya.

"Ghanaians should stop putting pressure on Kwesi Appiah because he [Kwesi Appiah] believes in his current team," he told Aseda FM.

My father died of COVID-19; I didn’t hide his travel history...
48 minutes ago