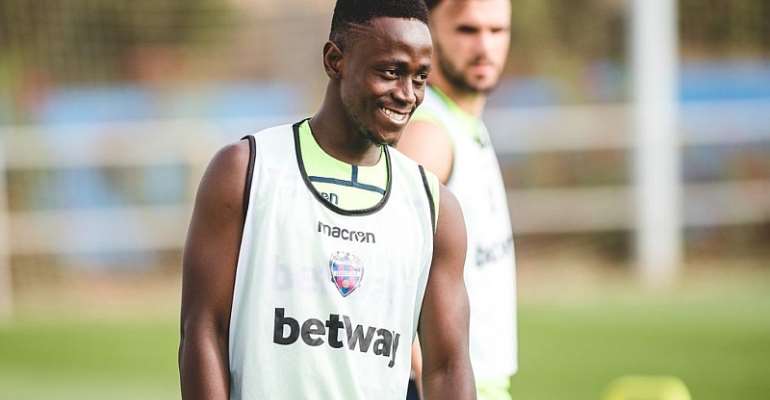 Ghana international, Emmanuel Boateng has joined the rest of his Levante teammates for preseason ahead of the new campaign.

Boateng was given some days off after he represented the country in a doubleheader friendly in June against Japan and Iceland.

The 21-year-old finally joined the rest of his teammates as Coach Paco Lopez led his side through some drills and ball work.

The pacy forward became the first Ghanaian to score against both Real Madrid and Barcelona last season.

His impressive performance against Barcelona last season saw him grab the headlines after his hat-trick ended the Catalans unbeaten run last season.

The Ghanaian is expected to play a huge role for the club next season hence his arrival for preseason.

Meanwhile, Levante will leave Spain on July 18 for La Finca de Algorfa for the second phase of the preseason and where they will play a friendly match against Bournemouth.

On the 22nd they will return and depart again, this time to Ermelo, on July 26 and until August 5. On Dutch soil, they will play against PEC Zwolle, Twente, Utrecht and Feyenoord. Once back in Spain, Albacete and Real Zaragoza await them.