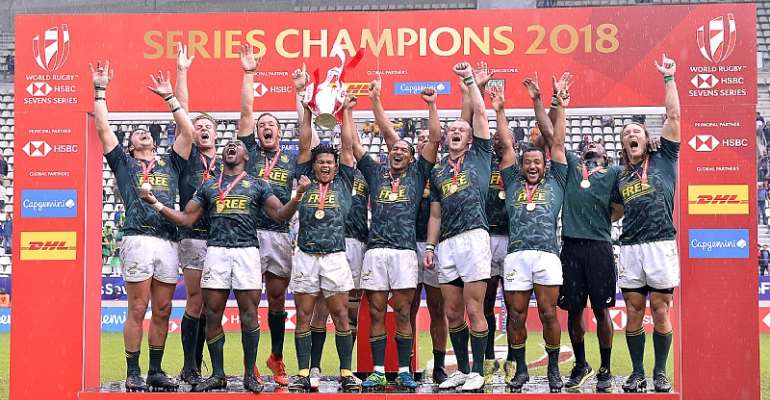 CAPE TOWN, South Africa, June 10, 2018/ -- The Springbok Sevens team on Sunday did a French double by not only defending their HSBC Paris Sevens title, but in the process the Blitzboks also clinched a second consecutive HSBC World Rugby Sevens Series title.

The victory in Paris, where the Blitzboks also won last year, saw Neil Powell’s team move past Fiji on the overall standings and retain their champions’ status. Fiji held a seven-point lead before the final tournament, but they faltered on the second day by losing in the quarter-finals to England.

This opened a small window of opportunity to the Blitzboks, which they took in dominant fashion, sealing the double-victory with a magnificent 24-14 victory in the final against England.

Powell was humbled by his team’s achievement, but heaped praise on their effort on the final day of an eight month, ten tournament series.

“You have to feel for Fiji, who won five tournaments, only to come up short by two points in the end, but this is also a massive reward to our Springbok Sevens and SA Rugby Sevens Academy system. There are so many people working so hard for this team and the squad here today rewarded all of them.”

Powell paid tribute to the 28 players used, management and all the support structures back in South Africa: “We do this for more than ourselves. The support from back home is incredible and we find support all over the world, we want to thank all.

“This is a massive credit to our system and we are all very proud to be part of it,” Powell said.

The Blitzboks qualified for each of the 10 semi-finals during the series. They won in Dubai and Paris, and were runners up in Sydney, Hamilton and London. They won bronze in Cape Town, Vancouver and Hong Kong and placed fourth in Las Vegas and Singapore.