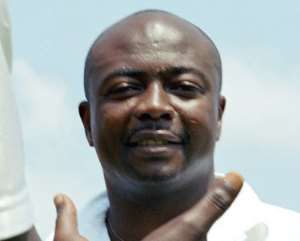 Ghanaian football legend Abedi Ayew Pele has revealed that he is ready to serve the nation in any capacity should the Black Stars qualify for Germany 2006.

Pele who in Nigeria on a Multichoice programme to promote African football did not hesitate when asked if he will serve the nation again."It is up to the Ghanaian people to decide and I am ready to serve my country in any capacity".Abedi said.

On the chances of the Super Eagles qualifying for Germany,Ghanaian football legend, Abedi Ayew Pele believes the Super Eagles are good enough to book a place at the 2006 World Cup finals but insists that their sloppy start can dent their hope of a fourth successive appearance at the biggest soccer tournament in the world. He urges Nigerians to pray for a slip by the Angolans in their last match with Rwanda in Kigali.

The former Marseille player also insists that Obafemi Martins is one of the greatest players on the continent.

Abedi, who spoke to reporters in Lagos on Wednesday, says that the Eagles have the players to do Africa proud at the 2006 World Cup, adding that he personally hopes the team eventually beat Angola to the sole qualifying ticket available for the Mundial in Group 4.

"Right from the start the draws were released for the African zone, I always wanted four countries to be at the World Cup and the countries, include Nigeria, Ghana, Togo and Ivory Coast. These countries have good players who are doing well in their respective clubs.

"But from the way things have been going, things might eventually change as man proposes but God disposes. But I really feel the Nigerian team can still qualify for Germany if they beat Zimbabwe and pray that Angola slip against Rwanda", added the thrice African Player of the Year Winner.

Praising the Super Eagles for putting up a remarkable performance in Sunday's 5-2 victory over Algeria in Oran, Abedi hopes that the last lap would end well for the team even though he expressed sadness over the poor start of the team, in the qualifying race.

"Nigeria has done a great job so far, especially when you look at the hunger and determination of the boys during the game against Algeria. The finishing has been remarkable but the starting was very bad and it is what is threatening to stop Nigerian from going to the World Cup.

"But when you look at their outing against Algeria, you just know these boys are ready for the challenge. You can't go and beat Algeria 5-2 in their country. You have to have a fantastic squad to do that. But it is no longer in their hands because no matter what happens against Zimbabwe, Nigerians have to open the other eyes behind their eyes, on what happens in Rwanda.

"Now that you have got so close, you are now hoping for a mistake to be made by Angola, which is essentially a gamble because it can go either way. But it would be remarkable to have Nigeria at the World Cup", added the 1993 UEFA Champions League winner with Marseille.

He commended the entire Nigerian team for the performance against Algeria but singled out Inter Milan star, Obafemi Martins for special mention.

"I admire Martins a lot because having played in Torino myself, I know how difficult it is to shine in Italy and still do well in Africa. Martins is doing a good job, plays with both feet, he is strong, fast and he is one of the greatest players on the continent", said Abedi, who added that he might be part of the Black Stars team at the next World Cup should they qualify.