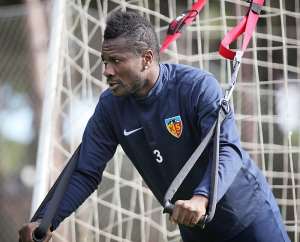 Asamoah Gyan has returned to full scale training with his Turkish side Kayserispor after shaking off an injury.

The Ghana captain has not played for the club since 14 December when he was brought as an early substitute in their 2-0 Turkish Cup win over Eyupspor.

Gyan was spotted at the club's training ground trying to put in a lot of work to be passed fit for their next task.

Kayserispor are in action on Thursday against Antalyaspor in the Turkish Cup return leg.

Before the winter break, the 32-year-old played five league matches and scored one goal for Kayserispor.