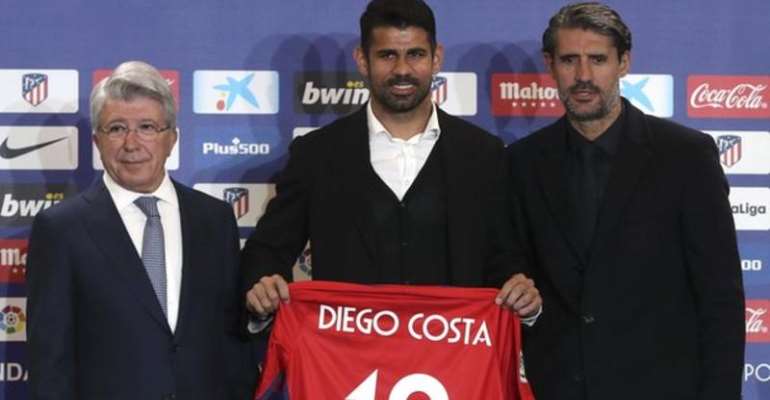 Former Chelsea striker Diego Costa has been officially unveiled at Atletico Madrid and could play as early as this week.

Spain international Costa agreed to sign for the La Liga side in September but has been unable to play due to the club’s transfer window ban.

“I’ve waited a long time for this day, I’m tired of training and I need to play,” Costa said on Sunday.

Atletico plays Lleida Esportiu in the King’s Cup on Wednesday.

Costa was officially presented at the Wanda Metropolitano stadium on Sunday, alongside fellow Spain team-mate Vitolo, who signed from Sevilla in July.

He then took part in an open training session, which local media said was attended by 20,000 supporters.

“I’ve been working hard and training hard but there’s nothing else to do,” Costa added.

“I’m in much better shape than when I arrived, I’ve prepared well and worked hard and I’m ready to help the team and score goals.”

Atletico Madrid have been under a transfer ban for the past two windows after being found guilty of breaching rules over the transfer of foreign players under 18.

But the ban expires on 1 January meaning Costa could make his debut on Wednesday, with his first league appearance set for Saturday at home to Getafe.

Costa, who left Atletico for Chelsea in 2014, scored 59 goals in 120 games appearances for the Blues.

He won two Premier League titles and the League Cup with the club but found himself frozen out at Stamford Bridge over the summer of 2017.

He returned to Atletico, who are second in La Liga but nine points adrift of leaders Barcelona, three-and-a-half years after he left.