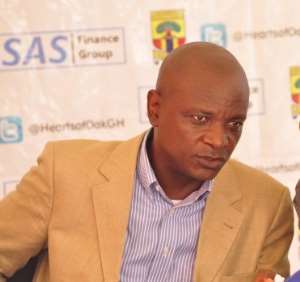 The questions to ask are: "Can there be a way out? Can the club be restored to its previously relatively more successful state? Can Hearts of Oak be a force to reckon with in Africa again after the conquests in 2000 and 2005? What can true and well-meaning Phobians do to rescue and refresh the drying Oak Tree?

Over the last 8 years, misery, sadness, pain, disjointed joy and intermittent short-lived happiness have been the lots of Hearts of Oak fans.

The sorry state of the limping Oak Family started when the then Board Chairman, E M Commodore Mensah, ably and strongly supported by current Board Chairman, Togbe Afede XIV, hatched the idea of floating shares of the club as a means of raising funds for the running of the club. Members of the then Board of Directors have publicly indicated how they opposed this move because of the dangers they saw ahead. It would seem that their worst fears have been realized.

The current state of the 2000 Africa Club Champions annuls the old adage which says 'He who rejects change rejects progress and is an architect of decay"; because the change Hearts had 8 years ago has, over the years, proved to be unproductive, irrelevant and needless so far as the current situation of the club is concerned.

Sadly, Togbe Afede XIV has a way of scaring the true Phobian from making advances towards rescuing the dying Oak tree by deliberately intimidating them with the 'Come and buy my shares' mantra.

Such a posture from Togbe Afede XIV only aggravates the sickening situation of the club and affirms the apparent belief that the Board Chairman's primary aim is to making money using the club.

A few more pertinent questions:
Are Phobians aware that even if committed and die-hard Phobians are ready to buy out the club from Togbe Afede XIV, they have to cough three times the amount he paid in 2011 to become the majority shareholder? Shocking, isn't it?

How did the shares appreciate in value to now be quoted at three times the purchase value?

What ingredients went into the current list price of the club's shares so that today, if the Board Chairman says anyone desirous of leading the club should come and buy his shares, they would be paying three times the value at which he bought them?

Was it to save the face of SAS or Hearts that SAS and SAI took up the shares that took the IPO over the threshold set by the SEC and thus became majority shareholders since SAS were brokers and sponsors of that IPO?

At what rate is SAS lending money to the club?
How much does Hearts of Oak owe SAS - in principal plus interest?

What is the real motive of SAS and SAI in their involvement with Hearts of Oak?

These are questions that must be heavy on the minds of Hearts of Oak supporters.

Still more questions:
Before the shares flotation, were there any alternative funding sources available to Hearts of Oak at the time?

Are there such sources today?
Will the supporters of Hearts of Oak step up and buy new shares if they are made available today?

Whilst we question the SAS and SAI angles, balance requires that we send a call to action to the supporters.

After carefully considering all these questions and pondering over them all this while, I figure out only one solution - a collective effort from die-hard Phobians to pay off Togbe Afede XIV and take our beloved club back since that is the only thing the Board Chairman will accept.

Togbe's dominance in the financial outflow for the club is, from my deduction, the main reason why Management looks on helplessly as players contracts run out, players go unpaid for months, Coaches are owed for only Allah knows how long and the club keep recycling its challenges season after season.

Togbe Afede decides when to give cash to the club when to pay players and coaches, how and when the club must do what to the extent of deciding the behavior patterns and conduct of coaches and those who matter in the running of the club.

We, as Phobians, need to wage a crusade, weep endlessly to our fanatics to contribute significantly to buy the shares and rescue our beloved club from destruction.