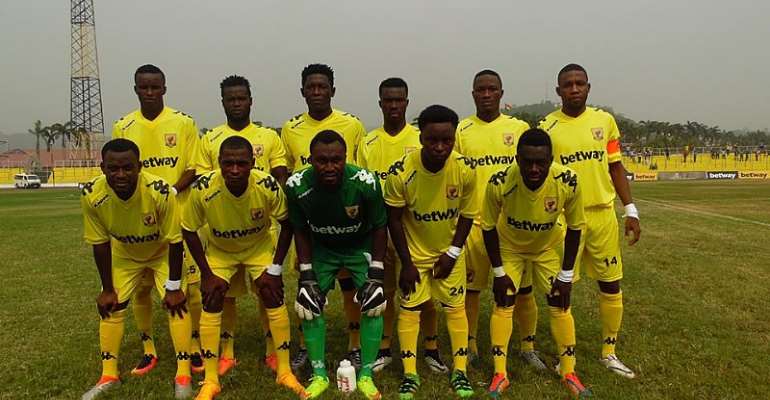 Relegation battle still lingers on for Ashanti Gold SC when they take on league champions Aduana Stars at the Len Clay Stadium on Sunday as the premier league comes to a closure.

The Miners are lying 11th on the league table with 38 points, just one point above the drop zone after a 1-0 loss to Great Olympics last weekend.

They need all three points from Sunday's fixture to be sure of safety as they will pass the 40 points mark. A win will see them move to 41 points.

The Gold and Black will be facing relegation from the top flight if they lose this weekend's game and Tema Youth FC win their fixture.

With the exception of winger Prince Owusu, CK Akonnor has every other player available for selection on Sunday against the Fire Boys.

Aduana Stars wrapped up their league championship triumph last Sunday when they came from a goal down to beat Elmina Sharks FC 2-1 in Dormaa.

They have won the competition for the second time in their history. First was in 2010, their maiden appearance in the premiership.

The Fire Boys have 57 points at moment. If they are able to win on Sunday, they will be the first club to clinch the Ghana premier league with 60 or more points since the 2011/2012 season.

Yusif Abubakar has almost all a full-strength squad to travel to Obuasi for the last league game of the season.

Right back and skipper Godfred Saka can't feature since he is recovering from a long-term injury.

Rashid Alhassan is also out due to his involvement in the Ghana team at the 2017 FIFA U17 World Cup.

(W3 D1 L4)
~ Aduana Stars are undefeated in their last seven fixtures in the premier league.

(W5 D2 L0)
~ Ashanti Gold SC have suffered just one loss of their last eight home matches in the league. They have won all last three.

(W6 D1 L1)
~ Aduana Stars have recorded only one victory in their last eight away games in the premiership.

(W1 D4 L3)
~ Ashanti Gold SC have lost at home to Aduana Stars in the premiership for only once after seven meetings.

(W3 D1 L1)
~ Ashanti Gold SC have kept six clean sheets out of their fourteen home games in the premier league this term.

~ Aduana Stars have managed to keep only one clean sheet from their fourteen away matches in the league this season.