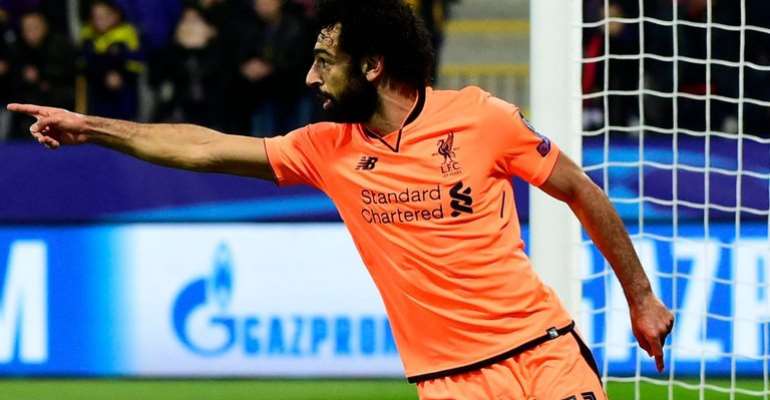 Liverpool recorded their biggest away win in Europe as they thrashed Maribor 7-0 in the Champions League on Tuesday.

Salah added a fourth before the break and Firmino, Alex Oxlade-Chamberlain and Trent Alexander-Arnold completed the rout in the second half.

It is also a welcome boost for the Reds, who had won just one of their last eight matches, ahead of their clash against Tottenham on Sunday, live on Sky Sports Premier League.

Liverpool could hardly have dreamed of a better first half as they dominated and looked threatened every time they attacked.

They were gifted the lead inside five minutes as Maribor gave the ball away, Salah pounced and then crossed for Firmino to tap in.

Coutinho added a second, volleying in after a well-worked move before Firmino slid through for Salah to finish in the 20th minute.

Liverpool made it 4-0 when Alberto Moreno crossed for Salah to tap in just ahead of Firmino, while Maribor's only chance of the first half came late on when Marko Suler headed wide from a free-kick.

Liverpool continued to dominate after half-time and Firmino nodded in the fifth from Coutinho's free-kick in the 54th minute.

Perhaps with one eye on their clash against Spurs on Sunday, Liverpool took their foot off the gas slightly, but still finished with two late goals as Oxlade-Chamberlain scored his first for the club and Alexander-Arnold fired in a deflected effort.

Liverpool's front three of Firmino, Salah and Coutinho were all excellent.

Maribor could not get close to Coutinho, who has now scored in his last four successive away games, while Firmino ended his month-long scoring drought with a brace.

But Salah takes the man-of-the-match honours for another exciting display that saw him score twice, set up another and always look threatening whenever he got the ball around the box.