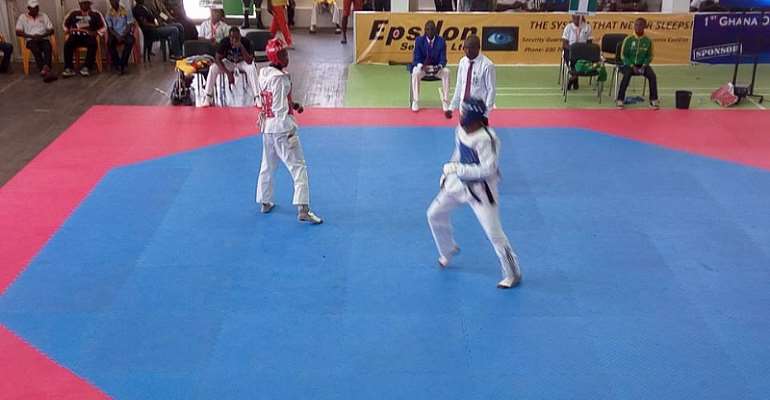 The first Ghana Taekwondo Open Championship ended successfully on Saturday at the Sports Hall of the Accra Sports Stadium with Niger and Cote D’Voire dominating the male and female categories with high class show.

Ghana placed fifth in the men with one silver and one bronze medal.

Niger who were second also collected five gold, three silver and eight bronze medals also adding up to 16 medals. The winning teams were awarded giant gold trophies from the organisers.

The Korean Ambassador His Excellency Woon Ki Leo congratulated all contestants and commended the Ghana Taekwondo Federation for hosting the first Ghana Open.

Captain Edward Abban of the xTDK Foundation who supported the international event with 15 nations competing said in Taekwondo every participant is a winner and urged those who could not win medals to train harder to become champions.

He noted that it is medals that encourage athletes to do better and hoped for better organization next year.

Hon. Robert Safo Mensah Director General of the National Sports Authority who was elated with the high level of performance noted that organizing the championship in Ghana has been positive with the renovation of the Sports Hall by Epsilon Security and also learnt about mental alertness and discipline in sports.

He thanked all stakeholders who contributed to the success of the event including members of the Ghana Taekwondo Federation, World Taekwondo, African Taekwondo, the National Sports Authority (NSA), the xTDK, the sponsors, media and general public who graced the tournament.

Fred Otu Lartey, President of the Ghana Taekwodo Federation (GTF) commended the six Ghanaians who won three silver and three bronze medals and urged them to be extra committed and train harder for future competitions.

He also thanked the sponsors who responded to their call at the last moment, especially Epsilon Security who have put the Sports Hall in better shape.

In some of the exciting tough matches, Nigerians and Ivoriens proved their strength, stamina and kicking skills to triumph.

Mercy Atiase of Ghana did well to give Ghana silver, as Jenny Quezada from the USA also performed creditable to also earn a silver medal.

Soh Won Kim from Washington DC in the USA told Yours Truly Ghana is a fantastic place and the people are very hospitable and friendly. He took a bronze medal in the -74kg category.

Samba Yan from Niger was one of the best performers. He said the tournament was keenly contested as all the athletes were well prepared and the standard was very high.