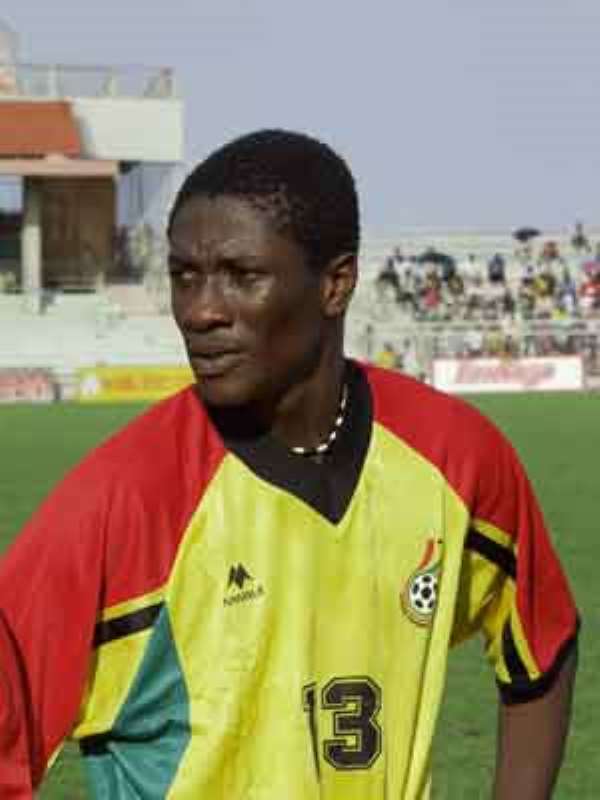 March 29 (Daily Graphic) -- Ghana's Black Stars may have picked a valuable away point in one of the most difficult football terrains and also walked away chest out after a stodgy display, but the players were left to rue a lost opportunity to line their pockets with $5,000 each.

A golden chance missed by young striker Asamoah Gyan in the dying minutes of the game denied the Stars a deserved victory, and most players agree that they would have laughed all the way to the bank had the young striker been more clinical in the Congolese penalty box.

Last Sunday's game was so crucial to Ghana's World Cup hopes and as a result the government increased the team's winning bonus from $3,000 to $5,000 as added incentive for the players to go the extra mile to win.

And perhaps that desire for a win rather than monetary considerations got the players' adrenalin pumping such that they put up one of the most brilliant displays in recent years despite the absence of some big name players like Samuel Osei Kuffour and Michael Essien.

Within three hours after the match most of the foreign legion were all dressed up and ready to fly back to their European bases empty handed except for the per diems they received in camp.

The rest of the contingent drowned their disappointment at a reception organised for them by GHANBATT 7, Ghana's contingent on UN peacekeeping mission a DR Congo.

The absence of Bayern Munich's Kuffour was hardly felt as the Stars' centre-back pair of Dan Coleman and John Mensah were rock-solid and executed their duties with military-style discipline.

Perhaps Essien, currently Ghana's biggest star in Europe, could have added more power to the midfield to be as combative as they were creative and a delight to watch.

It was difficult to single out any particular player for praise as the team generally put up a disciplined and inspiring performance on account of their recent standard.

And if there was any weak link in the team it may well be the attack that lacked the killer instinct to punish the Simbas after the Stars had the luxury of several scoring chances at the packed Matyrs Stadium in Kinshasa.

A four-day training camp in Nairobi enabled the players to concentrate and plot the difficult task of beating the Shabani Nonda-led DR Congo team that had not lost at home in the qualifiers.

Congolese have a history of intimidating visiting teams into submission. This time they could not have their way because on arrival the Stars benefited from military protection from GHANBATT 7 and sent strongest possible signals to the Congolese as well as made the Stars comfortable and feel safe and less intimidated.

The Ghanaian soldiers went at length and played perfect host by taking charge of the teams food and drinks requirements within the safety of their headquarters.

They even formed a strong 150-man cheer group among nearly 90,000 home fans crammed into the Martyrs Stadium, and hours later the soldiers joined the players and team officials to dance the night out at a reception.

So confident were the Congolese of beating Ghana that they predicted a 3-0 victory over the Stars, as wherever the team moved the citizens waved three fingers to signify their predicted scoreline.

Even at the Grand Hotel, where the two teams and the Gambian match officials were accommodated, Simba players wore an intimidating look at the sight of the Ghanaians.

To their surprise the Stars were a transformed side from the team they held to a scoreless game in Kumasi last October.

This time they played with a unity of purpose and total commitment never seen of them in a long time and put up a masterful display that reignited the players' self-belief and raised the hopes of their coach Ratomir Dujkovic.

The Stars looked well drilled in all departments of the game and took the game to the home side, dictated the pace and logically stunned the noisy home fans into near graveyard silence after Gyan scored the opener in the 31st minute.

The goal by the Modena striker was a strike of sublime quality as he beat an offside trap, controlled the ball on the chest and lobbed it over the onrushing DR Congo goalkeeper.

Although they ran the show in the first half the Stars did not carry the knockout punch to kill off the game and allowed the home side to come back strongly after recess to score the equaliser five minutes into the second half through Nonda.

For once, Congolese egos were bruised as they were outclassed on home soil. The teeming fans quietly trooped out of the stadium while a few others in a spirit of sportsmanship applauded the Stars as they made their way out of the stadium.

And for once the Congolese had long, quiet night, leaving Ghanaians to do the Makosa dance.