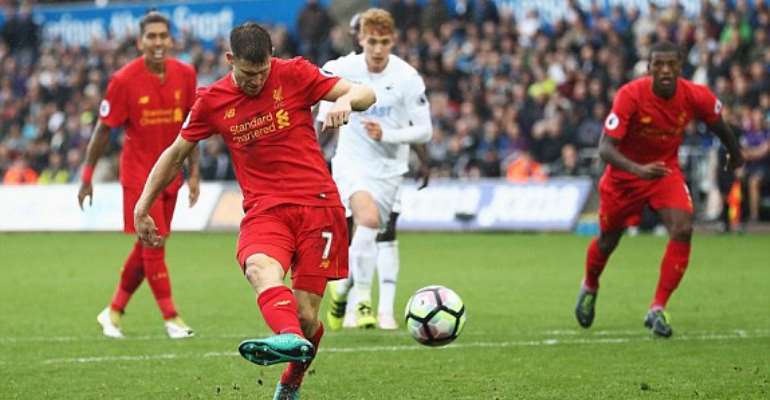 Liverpool ramped up the pressure on Man City and Tottenham following this impressive 2-1 win against Swansea.

Jurgen Klopp's side moved into second, but they were made to work for it and were a different side in the second half after an opening 45 minutes in which Swansea knocked them off their rhythm to take the lead through Leroy Fer.

The home side could have been out of sight if Borja Baston had managed to direct his headers into the Liverpool net, but instead they went in at half-time with a 1-0 lead, while Mike van der Hoorn missed a glorious chance to rescue a point at the death.

The Reds, meanwhile, lost Adam Lallana after just 22 minutes with a groin injury.

After Fer's opener seven minutes into the game, Swansea pressed the visitors and chances were few and far between. Their defence refused to break and when Liverpool did find a way through shortly before half-time, Jordi Amat was on hand to make an outstanding last ditch tackle and deny Sadio Mane.

Strong words from Klopp during the break saw Liverpool begin strongly and Firmino pounced 10 minutes after the restart, slipping in between the defence.

Phillipe Coutinho's initial free-kick was blocked but the Brazilian lost his marker to glance Jordan Henderson's second ball into the box. Swansea players appealed for offside, but replays showed he was definitely onside.

It was one-way traffic after that and the match officials were spot on again when Firmino was fouled in the box in the final 10 minutes of the game and Milner scored from the spot.

The Reds are now two points behind league leaders Man City and two in front of Tottenham who face each other at White Hart Lane on Sunday.