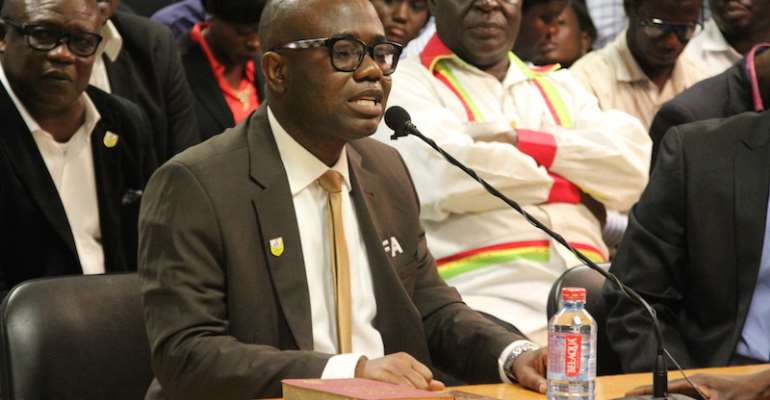 Dreams FC have thrown their support behind Ghana Football Association president Kwesi Nyantakyi to emerge victorious in the CAF election on Thursday for two places on the expanded FIFA Council.

A club statement read: Dreams Football Club wishes to extend its support to the President of the Ghana Football Association Kwesi Nyantakyi in his bid to become a member of the FIFA Council in the elections slated for Thursday, September 29th 2016.

"It is the firm belief of this football club that Ghana couldn't have had a better candidate vying for one of the two slots allotted Africa to serve on the supervisory and strategic body of FIFA.

"The interest of Ghana and African football as a whole, we believe strongly, will be best served with you as one of our representative amongst others serving in this capacity.

"Your track record of having led the GFA to chalk many milestone successes provides a solid enough basis on which to build a strong message to secure the required endorsement of the voting constituency to become victorious.

"As you go into Thursday's elections, be rest assured that the thought and prayers of Dreams FC will be solidly behind you as we are sure the whole of Ghana will be.

"Just like it happened some few years ago when you emerged victorious in the CAF Executive Committee elections, we hope to see you come out of this elections even more successful."

Nyantakyi faces stiff competition from five other contenders CAF's first vice-president Suketu Patel of Seychelles and second vice president Almamy Kabele Camara from Guinea are among the tough six candidates Nyantakyi will have to defeat to get a seat.

His counterpart on the CAF Executive Committee Ahmad of Madagascar as well as his fellow West African FA chiefs Hamidou Djibrilla from Niger and Senegal's Augustin Senghor are contesting.

The last contender for the election in Cairo is Chabur Goc Alei of South Sudan.

Police arrest Shatta Wale, two others for staging gunshot at...
2 minutes ago