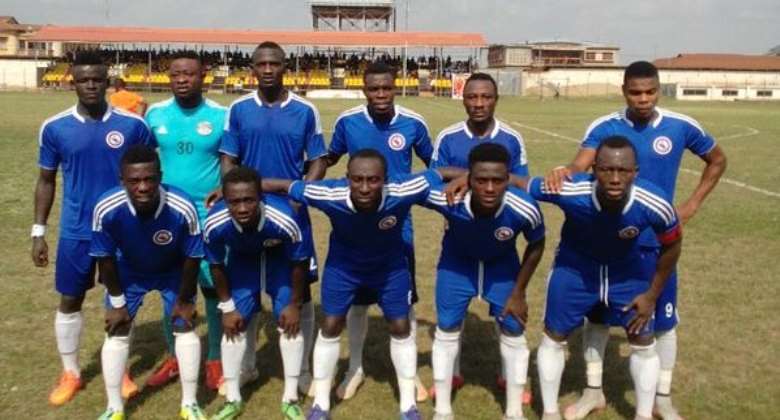 The battle for survival continues at the Golden City park on Sunday when Berekum Chelsea square off against rivals Techiman City FC in cagey regional derby in the Ghana Premier League.

The Blues lost at away to West African Football Academy last Wednesday making their premiership status next season in major doubt but a win in the derby will be enough to remain in the top flight.

Technical director Randolph Amoah will still lead the team into this game after coach Solomon Odwo was asked to step aside.

He has a whole squad available for selection on Sunday in their survival quest.

Francis Debrah and Nicholas Opoku are likely to partner at the back leaving experienced Richard Adjei on the bench.

Techiman City FC on the other hand need to defy all odds to make they get their first victory in the premier league as guests in the regional derby to be secured after Sunday's fixtures.

They got their safety chances boosted when they outclassed Sekondi Hasaacas with a 2-0 win at Techiman last Wednesday.

Fatawu Abdulman scored all two goals for the Citizens.

Bright Nsiah returned to the bench in midweek after recovering from an injury. He is expected to make a start against the Blues this Sunday in Berekum.

(W4 D2 L6)
*Techiman City FC have won only one of their last nine fixtures in the premier league.

(W2 D2 L5)
*Berekum Chelsea are unbeaten in their last six home games in the premiership.

(W5 D1 L0)
*Techiman City FC have failed to win at least one of their fourteen away matches in the league this season.

(W0 D3 L11)
*Berekum Chelsea are welcoming Techiman City FC to their home in premier league for the first time.

*Techiman City FC pipped Berekum Chelsea narrowly in their first ever meeting in the premier league.

*Berekum Chelsea have kept ten clean sheets at home in the premiership this term after fourteen matches.

*Techiman City FC have conceded in each of their fourteen away matches in the premier league this season.