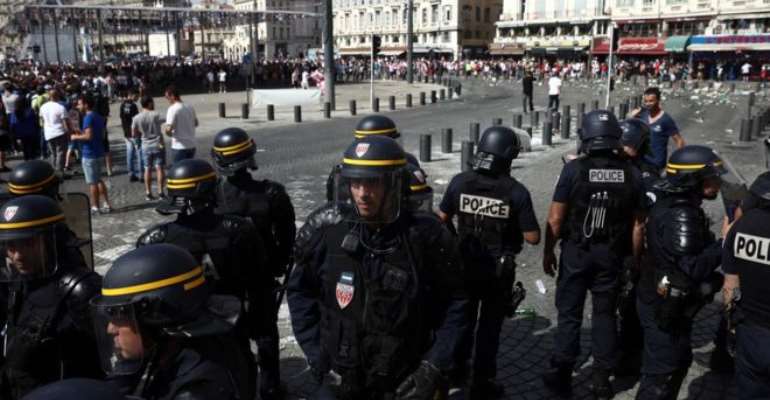 Some 150 Russians were behind much of the violence that erupted in Marseille when Russia played England in Euro 2016, French prosecutors have said.

But he said just two Russians had been arrested, both for a pitch invasion.

About 35 people have been injured, four seriously, following three days of clashes in the city.

Police deployed tear gas to disperse football fans on a number of occasions, and there were also clashes in the stadium on Saturday following England’s 1-1 Euro 2016 draw with Russia, after Russia fans appeared to rush at England supporters.

“These are extremely well trained people.”

Most of the 35 people who were injured in the fighting were English, Mr Robin said, adding that two Russian nationals were being expelled from the country.

A 16-year-old Briton was among those arrested and charged with throwing bottles during violence in Marseille.

Mr Robin said British teenager was in custody and that he had personally spoken to tournament organisers Uefa to have his future tickets cancelled.

Twenty people have been arrested in connection with the violence. 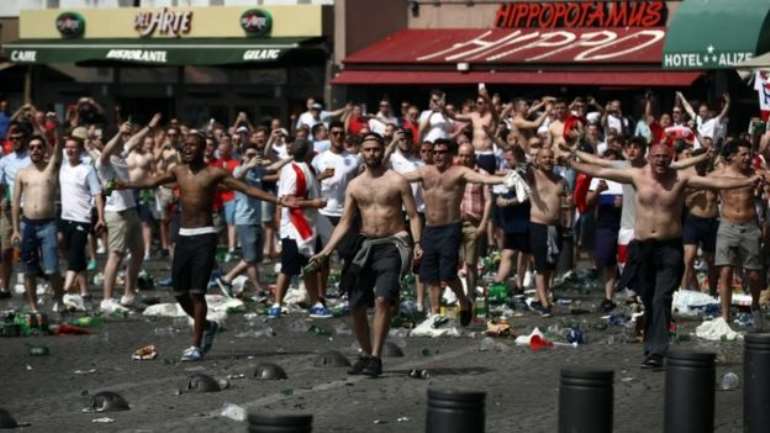 The prosecutor said he did not think the Russian hooligans were “professional” but they “were extreme”.

There were 12,000 Russian fans in Marseille who travelled to the city by train, he said.

Uefa has been investigating after Russia supporters appeared to rush at England fans in the stadium after their draw on Saturday.

It has threatened to ban both teams if there is further fan violence.

It also opened disciplinary proceedings against the Russian Football Union for alleged crowd disturbances, racist behaviour and the setting off of fireworks by its fans during the game on Saturday night.

Witnesses said trouble began in the stadium after flares were let off by Russian fans near the end of the game. Some then climbed across barriers designed to keep rival fans apart.

A number of Russia supporters appeared to kick and punch fleeing England fans, who were forced to clamber over fencing to escape. 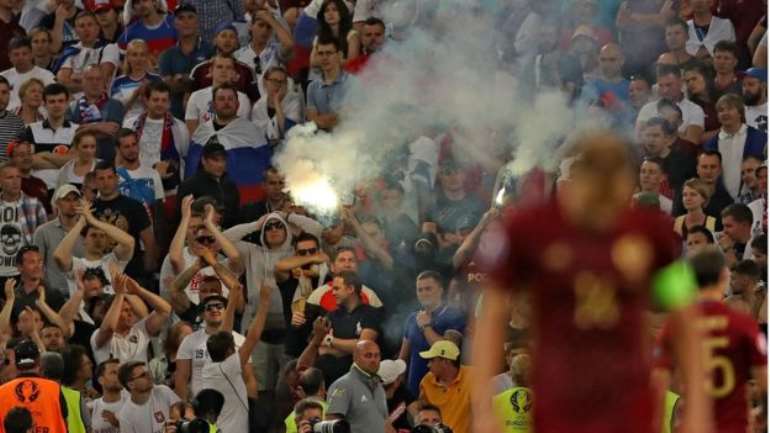 But Russian MP Igor Lebedev criticised French police and called on Russian football fans to “keep up the good work”.

“I see nothing wrong with football fans fighting. On the contrary, well done to our boys! Keep up the good work!” he tweeted.

“What happened in Marseille and other French cities is not the fans’ fault. It is down to the police’s inability to organise and hold such events,” he wrote in a separatetweet the same day.

Mr Lebedev said fans needed to be “protected”, adding: “We’ll deal with them when they get home”.

Meanwhile England manager Roy Hodgson and captain Wayne Rooney have appealed directly to fans to “behave themselves” following the violence.

“We are very concerned at the threat now hanging over us,” said Hodgson. “We have worked very hard to get here and desperately want to stay.”.

The French government has urged cities hosting Euro 2016 matches to ban alcohol near venues and fan zones following the violence.

The UK government has offered to send extra British police ahead of England’s next match in Lens on Thursday.

Russia’s next match against Slovakia will take place in Lille on Wednesday – the day before England’s match against Wales, just 24 miles away in Lens.

Lens has already banned alcohol from being sold and fans without tickets for the match or fan zone have been told not to travel.

Sanctions against Russia will be decided at a disciplinary meeting on Tuesday, Uefa said.

Meanwhile, in a separate incident not related to the disorder in Marseille, a Northern Ireland football fan died after a fall in Nice following the team’s 1-0 defeat by Poland.

Darren Rodgers, 25, from Ballymena, fell 26ft (8m) over a barrier from a promenade on to a hard pebble beach in the south coast city in the early hours of Monday morning, police said.