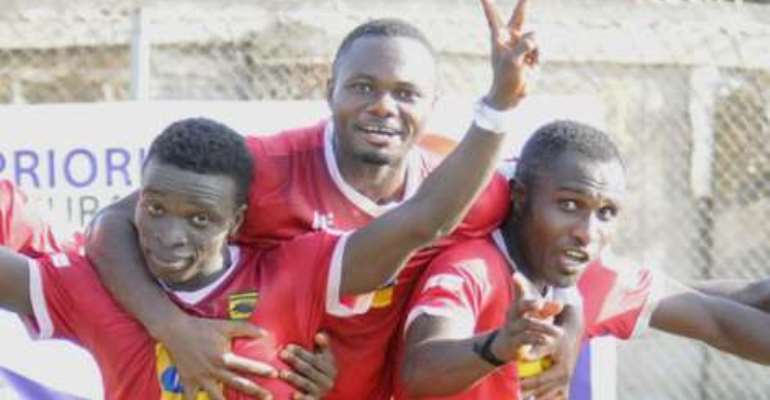 Asante Kotoko defeated Inter Allies by a goal to nil at the Baba Yara Sports Stadium on match day 13 of the Ghana Premier on Sunday.

Skipper Amos Frimpong's penalty in the 60th minutes settled the score against Inter Allies, who played majority of the second half with ten men.

The first half didn't see much action as both teams failed to find the back of the net. However, the Porcupine Warriors were scared by the injury of Obed Owusu, their main attacker on the day, due to the absence of Dauda Mohammed.

The second half was full of thrills, with Kotoko intensifying their search for a goal to secure all the three points.

In the course of dictating play Elvis Amoh was brought down in the 18-yard box and Amos Frimpong stepped up to put Kotoko in the driving seat from the resultant penalty kick.

Before Amos Frimpong scored the penalty kick awarded his side by the referee, Inter Allies team manager who wasn't pleased with the decision, expressed his displeasure which held up play for some few minutes.

Former King Faisal marksman, who has returned to Inter Allies was flashed a second booking by the centre referee, some few minutes after the match opener for delaying, following his substitution from the game.

Kotoko took advantage of the numerical advantage and pushed more men in search for the second goal, but couldn't utilise the chances.

Inter Allies were missing the services of their three key players who are with the Black Satellites, while Dauda Mohammed, the leading top scorer for Kotoko couldn't have a part a part to play in the game for the same reason.

Kotoko have extended their winning run to 4 league games on the trot, while Inter Allies are still without a win in 6 league games